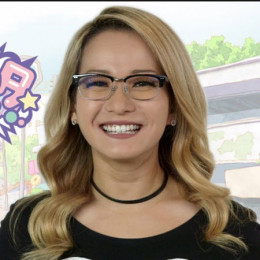 In the modern world, grabbing limelight can be easy when you are a talented person and an Internet star. Reina Scully is one of those stars who grabbed the modern means of communication and rose to fame as a Youtuber. She is also recognized as the host of SourceFed and the workaholic person of the programme who helped them grab the Streamy Award.

Personal Life of Reina Scully: Is she Married?

Scully and his partner, Michael turned their boyfriend-girlfriend relationship into a holy matrimony after dating a couple of years. Flusk was her bestfriend first before being a husband. The lovebirds aren't ina rush to have children but they owns a havanese dog and a cat as pet.

The pair dated for several years and finally decided to engage in 2014. After two years the couple shared the wedding vows in October of 2016 among their close friends and relatives in a Japanese traditional wedding ceremony.

Reina is out of any controversies and dating rumors as of now. The youtube sensation seems happy with her husband as there is no sign of their divorce. Moreover, she is career oriented and is motivating herself as a bigger youtube sensation.

We have officially moved to Japan ???? I’m sorry for the lack of updates, I jinxed us and we went through SO MUCH SHIT during the last 2 days of our move, I even had to delay our flight but alas! We made it! And even got to celebrate my husbando’s birthday (November 5th) Thank you for all of your well wishes, that positive energy certainly helped!!!

As an Internet star, she is an active person on social media and uses many modern means of communications. Moreover, she is an animal lover and owns a pet cat named Peanut.

What is the net worth of Reina Scully?

My beloved hair god and dear friend @kyledavidhair This might sound weird to many of you but I owe a lot of my career and ability to be confident to my hair. It makes me stand out and that is crucially important when working in entertainment. I’m sad I won’t see you nearly as often but I promise I’ll take care of my hair until I see you next which won’t be long~ I love u Kyle! @sallyhershbergerla #olaplex #blonde #haircolor #blondehair

She initially started working as a host of SourceFed in March of 2014. Although she started her youtube career on 17th October in 2011, she grabbed fame after working as the host and then she caught the attention as a YouTuber.

Her Youtube videos are basically based on daily products uses as well as anime review and Japenese lessons. Moreover, she also translates Japanese anime and manga for Crunchyroll.

Reina is married to the Michael Flusk. The duo shares a good bond and is in a marital relationship from three years.