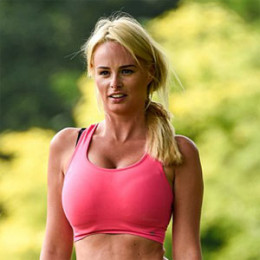 Rhian Sugden is a British lingerie and glamour model, well known as a Page 3 girl. She has featured in famous magazines like Nuts and Maxim, Loaded Zoo and much more.

Rhian Sugden was born on 11th September 1986, at Bury, Greater Manchester, England to Anita Sugden and Stephen Sugden. She holds British nationality and is of White ethnicity.

Rhian Sugden before starting her modeling career worked as a network administrator at Global Telecoms and Technology located at Bury.

Later Sugden decided to be a model and sent her pictures to Samantha Bond, a glamour model agency based in London. Currently, she is signed with Girl Management. Sugden has also featured on Page 3 of The Sun and magazines like Nuts and Maxim, Loaded Zoo. Besides modeling, Sugden is also a skilled DJ.

In 2008, the glamorous model starred in a documentary titled Glamour Girls on BBC 3. She also appeared inYour Highness in 2011. The same year, she took part in a reality show Celebrity Big Brother 10. Sugden has also made her appearance on an online video by Rankin for Male Cancer Awareness Charity.

In 2014, she again focused on modeling and featured on Hot Shots Calendar.

Rhian Sugden married a British actor, Oliver Mellor, in 2014. They are often caught enjoying together in beaches and other places.

However, few rumors flew regarding Sugden and Vernon Kay(Sugden's alleged boyfriend of 2012) secretly texting even after her marriage with Oliver Mellor. But no confirmation has come from both the parties, so it may all be a hoax.

Rhian Sugden earns a decent amount of money from her modeling and acting career as she has modeled for various popular brands and acted in movies also.

According to the sources, Page 3 girls are paid around £12,000 per year and depending on the popularity some even earn £100,000 a year, like Abi Titmuss made around £1M per year. Sugden got paid £500 for a day-long personal appearance, signing autographs as a Page 3 girl. She also charged £10 for an autograph.

Rhian Sugden married Oliver Mellor, a British actor. Since their marriage, the couple is living a happy life together.