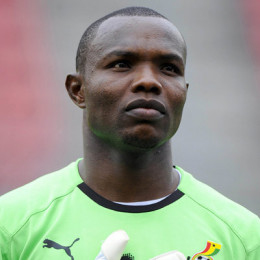 A well known professional Ghana Football Goalkeeper who previously played for TFF First League Club Balikesirspor and is currently a free agent. He also plays for the Ghana National Football team. He moved to Turkey from Ghana for his higher future in football career. He played for several modest Turkish clubs like Hammarby, Brimingham City, wigan Athletic and Black Pool in England.

Thirty six years old player is already married. Though they haven't divorced, their married life didn't seemed to be quite successful. The couple have been frequently involved in controversies. The news about couple was in headlines when his wife confessed of using spirits to dissolve Richards career and rendered him impotent while praying in a church in Nigeria. The couple has not given birth to any children.

Though much information is not available about her but it is clear that their relationship is not at good pace at present.