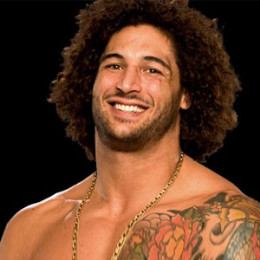 Richard was born on May 12, 1975, in Phoenix, Arizona. He studies two years at Glendale Community College in Glendale and then transferred to the University of Tulsa. He is an American and belongs to white ethnicity.

Young played for the Tulsa Golden Hurricane during his college and played 22 career games and was credited with 177 tackles as a linebacker. He then joined the training camp of 1998 season with the NFL's Kansas City Chiefs and was on the practice squad during the season.

He briefly played in XFL with the Orlando Rage and again joined AFL with Indiana Firebirds in 2002. In 2004 Young joined Colorado Crush.

Before joining WWE, he debuted in wrestling with Ohio Valley Wrestling in 2006 under the name Atlas Dabone. He suffered a torn ligament in the knee due to which he took a break from OVW on March 3, 2008. Richard returned to action on April 17 in Florida Championship Wrestling.

In 2008, Young made his WWE debut as a face under the name Atlas Ortiz on the ECW brand winning his first match against Armando Estrada. His last match for WWE was August 7 episode of SmackDown where he was squashed by The Great Khali and was released on August 8, 2009, from his WWE contract

Talking about Young’s personal life and his relationship status, he is a married man and tied the knot with his longtime girlfriend, a former WWE Diva Layla El.

Young began dating Layla in mid-2014 and on July 28, 2015, El announced their engagement via her Twitter account. The pair married in late November in Glendale, Arizona.

Till now the husband and wife couple has no children. However, they are living a happy life and still now the couple shares the same love when they first met.

The exact figures of Ricky Ortiz's net worth is still under review. However, looking at his successful career as a football player and pro wrestler, he may have a huge value.

Layla El is one of the proficient retired wrestler and is also known as a dancer and model . She is married to professional wrestler and footballer known by his ring name Ricky Ortiz. Previously El was in affair with Cody Runnels and mike “The Miz Mizanin”.