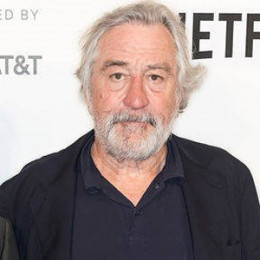 Robert De Niro is a versatile American actor who is best known for portraying the character of young Vito Corleone in the 1974 film The Godfather Part II for which he received Oscar for Best Supporting Actor. He started working on movies since the age of 20 and is still active today. He is the father of six children from his three relationships.

Both of his parents were painters by profession. He was just two years old when his parents separated, after that his mother raised him. He joined PS 41 for his preliminary education in Manhattan for the sixth grade. Later, he attended Elisabeth Irwin High School and Little Red School House for his seventh and eighth grade.

Later he joined the High School of Music and Art for his ninth grade. De Niro enrolled at McBurney School and completed his high school studies and later went to Rhodes Preparatory School but he never graduated. He dropped out of college to pursue his career in acting. At the age of 10, De Niro made his stage debut during his school time. He learned acting at Stella Adler Conservatory and then went to Lee Strasberg's Actors Studio.

Robert De Niro started his acting career in 1963 with the movie, ‘The Wedding Party’ but it was released only in 1969. He also appeared in minor roles in several films. He got his first leading role in Greetings made in 1968.

In 1973, his two movies hit the silver screen, ‘Bang The Drum Slowly’ and ‘Mean Streets’ and both the film marked commercial hits at the box office. The following year, he portrayed the character of Vito Corleone in The Godfather Part II for which he received Academy Award.

De Niro continuous effort and hard work gave him his first Best Actor award in Oscar for the movie, Raging Bull. He appeared in several films including; Main Streets, The King of Comedy, Goodfellas, Analyze This, Meet the Parents franchise, Analyze This, Machete, Killer Elite, Silver Linings Playbook, Las Vegas and many others.

In 2004, he lent his voice to the animated film, Shark tale as Don Limo. Two years later, in 2006 he came up with his second directorial movie, The Good Shepherd where he acted alongside Matt Damon and Angelina Jolie.

Additionally, he co-founded the film studio, TriBeCa Productions. He owns few restaurants and hotels too; Nobu, Tribeca Grill, and The Greenwich Hotel.

Robert De Niro is happily married to actress, Grace Hightower. The duo exchanged vows in 1997 at his Marbletown home and split in 1999. But the divorce was never finalized. Later the couple remarried in 2004, and since then they are together without any disputes and misunderstanding.

Previously, De Niro was in a marital relationship with Diahnne Abbott, an actress, and singer. The couple walked the aisle in 1976 and are blessed with a son, Raphel. He adopted Diahnne daughter, Drena De Niro from her previous marriage. However, the couple couldn't handle their married life and divorced in 1988.

He fathered twins son by in-vitro fertilization and delivered by a surrogate mother in 1995 from his long-term relationship with Toukie Smith, a former model. In 2003, De Niro was diagnosed with prostate cancer.

De Niro has six children and four grandchildren from his three partners.

Robert De Niro is one of the most successful Hollywood stars who worked in nearly 100 movies during his 54 years of acting career. He has a net worth of $200 million as he makes over $15 million per movie. As per the report, he made $50 million in 2015 by appearing in three different films and producing movies.

His estimated salary is $15 million per year. He owns a car, Rolls Royce which has a market value of $600,000. Despite that, he owns many luxurious house and cars.

Diahnne Abbott is an American actress and singer. She portrays the secondary roles in films of the 1970s and 1980s, including Taxi Driver.

Grace Hightower is an American philanthropist, socialite, actress, and singer. She is married to Robert De Niro since 1997.

Helen Grace is the only biological daughter of Robert De Niro and Grace Hightower. She is very beautiful like her mother.

Elliot is the first child of Robert De Niro. He was born before his parents split apart in 1999.