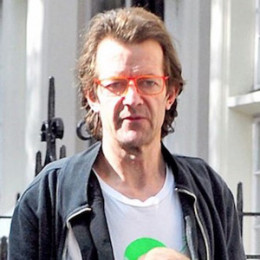 Robie Uniacke is the current boyfriend of the popular actress Rosamund Spike. Regarding his career, he is a businessman and mathematical researcher.

Robie Uniacke was born in 1965. Since childhood, he was quite interested in mathematics. Uniacke is a businessman and a mathematical researcher.

He was disqualified as a company director back in May 2018. He failed to pay about  £200,000 to the taxman. He was banned from his company named Pale Fire for four years after a number of offenses following an investigation.

His firm named 'Pale Fire Ltd, an IT consultancy organized in 2010 was dissolved in 2016. The liquidator mentioned that his account was overdrawn by £133,000.

Due to his secretive nature, he hasn't revealed much about his business but he made a good sum of the amount from his profession. His wife is one of the renowned names in Hollywood and her net worth is $9 million.

Robie Uniacke is in a romantic relationship with his girlfriend actress Rosamund Pike. The duo first met through a mutual friend and eventually fell for each other. They made their relationship official in 2009.

The couple is fully committed to each other. They are also proud parents of two sons, Solo Uniacke and Atom Uniacke. He spends most of his leisure time with his beautiful girlfriend Spike and his children. 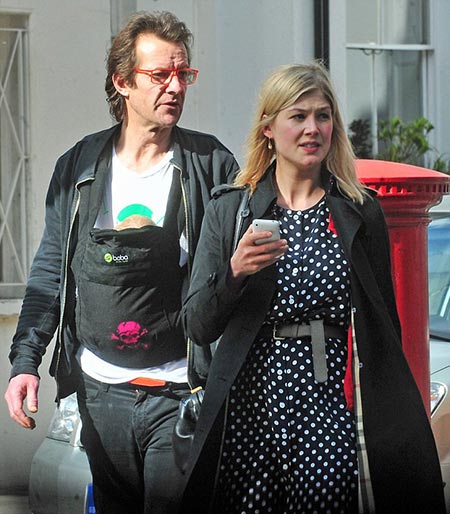 Robie Uniacke and Rosamund Pike with their baby,

Uniacke and Pike started seeing each other in around 2008. She admitted that she was attracted to him because he was 'the most interesting person I've ever come across'.

Also, she credited him for the rise of her career. She stated:

'I have a very clever partner who's got a very astute mind and is very, very well read and articulate and ruthless about how something I do might play out on screen.'

'My tendency is to identify with a character and imagine there is more on the page than there is. He's quite good at putting a check on that.'

The couple is living together with their kids in their £2.3m house in Islington, north London.

Uniacke was previously married to Emma Howard, the daughter of the late Earl of Carlisle. They both ended things after their addiction issues. He has a son named Robie Jonjo Uniacke from Emma.

Later, he married an interior designer, Rosa Batstone. They together had three children named Hector Uniacke, Olive Uniacke, and Florence Uniacke. Like his first marriage, this one also ended in divorce.

The mathematician Robie was once a drug addict. He had to check in rehab to overcome the addiction.

Emma Howard is the ex-wife of Robie Uniacke. Their marriage ended as both had to check into rehab for their addiction issues.

Rosa Batstone was the second wife of Robie Uniacke. She is an interior designer by profession.

Robie Jonjo Uniacke is the eldest child of Robie Uniacke from his ex-wife Emma Howard.

Hector Uniacke is one of the sons of Robie Uniacke from his ex-wife Rosa Batstone.

Olive Uniacke is one of the daughters of Robie Uniacke from his ex-wife Rosa Batstone.

Florence Uniake is one of the daughters of Robie Uniacke from his ex-wife Rosa Batstone.

Solo Uniacke is the son of Robie Uniacke from his girlfriend Rosamund Pike. He was born on May 6, 2012.

Atom Uniacke is the son of Robie Uniacke from his girlfriend Rosamund Pike. He was born on December 2, 2014.