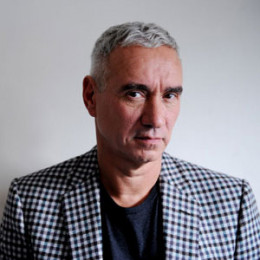 Roland Emmerich is a German film director, screenwriter, and producer. He is known for films such as The Day After Tomorrow, Godzilla, Independence Day and Stargate. Emmerich is openly gay and is in a romantic affair with boyfriend Omar de Soto.

Roland Emmerich was born on 10 November 1955 in Stuttgart, West Germany where as grew up in the nearby town of Sindelfingen. In his early days, he traveled a lot with his father Hans, the founder of garden machinery Production Company.

Emmerich went to University of Television and Film Munich. He first took a production designer lesson before joining the school’s film director program.

In 1981 he wrote and directed the full-length feature The Noah’s Ark Principle as part of his final thesis. His work was screened as the opening film of the 34th Berlin International Film Festival in 1984.

Roland is a film director, screenwriter, and producer. He entered the film industry with his directorial venture The Noah’s Ark Principle in 1984. He began his career in his native Germany and his incredible work led him to Hollywood.

He co- founded Centropolis Entertainment in 1985 along with his sister, a producer Ute Emmerich. He then directed supernatural films including Making Contact in 1986 and Ghost Chase in 1987.

He has directed and produced several blockbusters like The Day After Tomorrow in 2004, Godzilla in 1998, Independence Day in 1996, and The Patriot in 2000.  In 1994 he collaborated with Devlin and made a film titled Stargate which was a big hit.

Furthermore, Emmerich is a campaigner for an awareness of global warming and equal rights. He also raised his voice for the gay and lesbian community.

The 62-year-old Roland is openly gay. He is engaged to his long time boyfriend Omar de Soto. The duo is planning to exchange vows very soon. They have been in a romantic relationship since 2009.

Emmerich is a collector of art. He has made a collection of a Jesus Christ, prints of Alison Jackson’s work of Princess Diana and many others.

Roland owns a luxurious house in Los Angeles, New York City, London, and Stuttgart. He is a financial supporter of U.S progressive politics. In 2006 he made a donation of $150,000 in behalf of Outfest to the Legacy Project, a campaign dedicated to gay and lesbian film preservation.

In 2007, he held a fundraiser at his Los Angeles home for Democratic Party presidential candidate Hillary Clinton.

His Hollywood films have made more than $3 billion and $1 billion in the United States. He is the country’s 11th highest grossing director having an estimated net worth of $200 million.