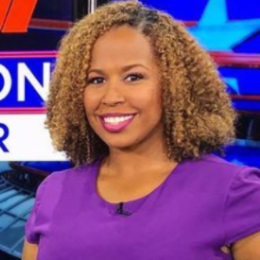 Romney Smith is an anchor who worked for Ohio-based news station WKYC which is also an NBC-affiliated television studio. People also recognize her as the wife of Jason Frazer who is one of the best meteorologists known for working at WKYC Channel 3 in Cleveland, Ohio, and 680news in Toronto.

The widely popular Romney Smith is married to her boyfriend turned husband, Jason Frazer. The most common thing between the two is that they have sheer interest and passion for news reporting. 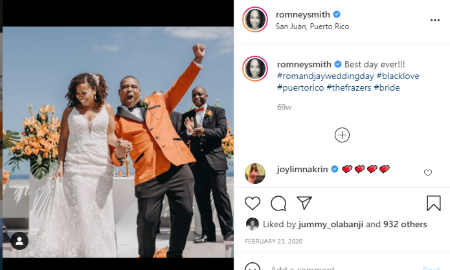 The lavish wedding ceremony of Romney Smith and Jason Frazer was held on a cruise in San Juan, Puerto Rico. Romney donned her custom-designed white sleeveless gown, whereas her handsome groom flaunted his orange tuxedo.

To add more, the romance between these two blossomed about seven years ago when they met at the party of the National Association for Black Journalist conference in 2013.

The friendship later turned into a love affair and eventually to a husband and wife. Then, surprisingly enough, Jason Frazer proposed Romney Smith with a diamond engagement ring on his knees. Of course, Romney happily replied "Yes" without any hesitation.

The couple was head over heels when they eventually tied the knot on February 23, 2018. As of now, Romney and Jason have successfully crossed nearly three years of marriage with fewer signs of divorce. Not to mention, Smith and her spouse also own a 14-year-old Yorkshire Terrier named Linney.

Why Did Romney Smith Leave WKYC?

Back then, Romney Smith and Jason Smith both had to adjust their long-distance relationship as they both worked and moved to different states. However, after serving two years on WKYC, the pair announced they left the company on July 13, 2021. The News anchor couple addressed their last day on WKYC would be on WKYC Channel 3. 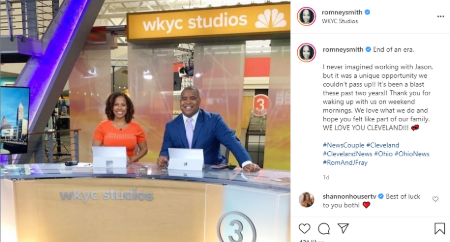 In the mid-2021, the newlywed couple decided to leave the network after they found the pandemic harmed their personal and professional lives. They also declared that they wished to spend more time with their families in New York City.

How Much Is Romney Smith Net Worth?

Romney Smith has an estimated net worth of $1 million, as of 2021. Smith earned that wealth from her decade-long career as a news anchor for WKYC. For being an experienced WKYC news anchor, Romney earned anywhere from $80,549 to $112, 985 per annum.

In addition, she anchored the weekend morning reports. Before her position at WKYC, Smith served as an anchor or investigative reporter for WTOC in Savannah, Georgia.

Romney's WKYC profile suggests she played a major role in launching multi-platform digital newscasts for the station. The news anchor also helped in re-launching the investigative unit for WTOC. All in all, the 34-year-old was acclaimed for her reports that give more priority to increased sex trafficking in Georgia.

Keep coming back to MarriedWiki for more interesting biographies and articles.

Romney Smit and Jason Frazer are happily married for three years. They tied a knot in 2012 and still going strong.