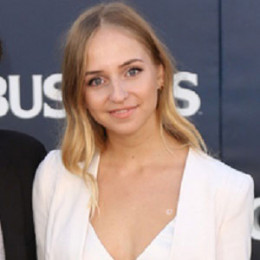 Rosa Van Iterson is a Dutch writer, actress, YouTube star, and producer, well known for her YouTube channel "Sam & Rosa" along with her spouse Sam Pottorff. The 25-year-old YouTube has also acted an international short film, Uitgesproken in 2013. She and fellow YouTube star Sam Pottorff dated for six months before getting married in 2017.

Rosa Van Iterson was born on 27 April 1992, in the Netherlands. She is of Caucasian ethnicity and holds Dutch nationality. Iterson attended the Film Actors Academy Amsterdam as the student of 2014.

Rosa Van Iterson began her acting career through 2013 movie Uitgesproken. She portrayed the role of Angela in the movie. She has also co-directed the short-film The Chase and did a small cameo in the film.

Iterson's appearance in television series includes Het verborgen Eiland, Hidden Stories, Feode tijden, Slechte tijden, Burt Paxton: Private Detective and her producing credits include, Young & Alone, and The Chase in which she directed and co-wrote too.

She runs a YouTube channel along with her husband Sam Pottorf called Sam & Rosa. Currently, the channel has more than 200,000 subscribers. The couple earns over $9k annually from their YouTube channel.

Rosa Van Iterson married her long-time boyfriend Sam Pottorff in April 2017. Both the pair was young during the marriage.

The couple has so much immense love for each other. After their engagement Sam Pottorf said,

"I had to get her before someone else could, because she is my better half," Pottorff captioned their engagement snapshot on Instagram. "She's made me a better person and helped me through things I didn't even know I had to go through. And everyday I'm without her I feel so lost, she's to good to be true and I would never be able to find anyone better. She's the most amazing person I've ever met and I can't wait to spend the rest of my life with her."

Since they're happily married, there is no any sign of getting a divorce or affairs in their relationship.

Rosa Van Iterson and Sam Pottorff married after their long-term relationship. Since their marriage, the couple's having a hard time due to long distance and busy with their own work.