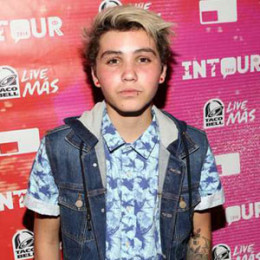 Sam Pottorff is a vlogger popular on social networking sites like Snapchat, Twitter, and YouTube. He is also known as the member of the popular web star group Our2ndLife alongside Trevor Moran, Kian Lawley, Connor Franta, and Jc Caylen. He is married to his longtime girlfriend Rosa Van Iterson.

Sam Pottorff was born on 19 October 1995, in Laguna Beach, CA. He is of mixed ethnicity(half Arab and half American) and holds American nationality. Pottorff has three siblings, Cloe Pottorff, Mia Pottorff, and Levi Pottorff.

Sam Pottorff was raised in Clemente, where he made music videos, learned photography and surfing. Pottorff was diabetic since he was five years.

Portoff along with his brother attended the independent study school Opportunities for learning in California. He was dropped out of school and was home-schooled due to bullying.

Sam Pottorff began his career as a member of the web star group, Our2ndLife alongside other internet stars including, Trevor Moran, Connor Franta, Kian Lawley, and Jc Caylen. He has also earned a huge fame from the group. However, the group disbanded in 2014.

After the separation, Pottorff collaborated with internet sensation Zach King to make a large web following through popular videos.

Sam Pottorff married his longtime girlfriend Rosa Van Iterson in 2017. He was twenty-one years when he married. Since their marriage, the couple is living a happy life and there is no sign of them getting separated.

Previously, Portoff was rumored to be in a relationship with Jessica Carbo for a short period of time.

Sam Pottorff earns a considerable amount of money from his career as a YouTube Star. At present, Pottorff's total net worth is estimated to be $500,000.