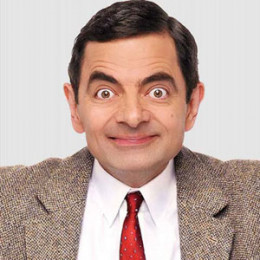 Rowan Atkinson is an actor and comedian who is mostly famous for his role as MR. Bean. He also featured in the BBC sitcom The Thin Blue Line. He has also gained much success with his performances in the Mr. Bean movie adaptations Bean and Mr. Bean's Holiday, and also in Johnny English and its sequel Johnny English Reborn. He appears as the titular character in Maigret. He was also elected as Commander of the Order of the British Empire.

Rowan Sebastian Atkinson, known as Rowan Atkinson is an English actor, comedian, and screenwriter born on 6 January 1955 to father Eric Atkinson, a farmer and company director, and mother Ella May. He was youngest among his brothers Paul, who died infant, Rodney, and Rupert.

In 1979, Atkinson starred in the comedy series for BBC Radio 3 named The Atkinson People, which consisted a series of satirical interviews with fictional great men every week, which was written by Atkinson and Richard Curtis and produced by Griff Rhys Jones.

After finishing his university, he attended a tour with Angus Deayton for a television show. After the success of the show, he worked in a one-off pilot for London Weekend Television in 1979 called Canned Laughter. Later, he worked on Not the Nine O’Clock News for the BBC, which was produced by his friend John Lloyd, along with Pamela Stephenson, Griff Rhys Jones, and  Mel Smith. The show success led him to get the lead role in the medieval sitcom The Blackadder, which was co-written by him and Richard Curtis. After 3 years of gap, due to budgetary concerns, a second series was broadcasted, which was written by Curtis and Ben Elton, named Backadder II(1986), more sequels Blackadder the Third (1987), and Blackadder Goes Forth (1989), which became one of the most successful series in all BBC situation comedies.

In 1990, Atkinson’s other creation, the hapless Mr.Bean was released as a half-hour special for Thames Television. Various sequels of Mr. Bean appeared on the television until 1995, and later the character appeared in the feature films like Bean(1997), Mr. Bean’s Holiday(2007). In 1995 and 1996, he portrayed the role of Inspector Raymond Fowler in The Thin Blue Line. He appeared in the long-running series of adverts for Barclaycard. In 1999, he played the Doctor in The Curse of Fatal Death. In July 2011, he appeared in the Star in the Reasonably Priced Car on Top Gear, driving the Kia Cee'd.

In 2012, he appeared in the  Summer Olympics opening ceremony, as Mr. Bean. He starred as Jules Maigret in Maigret, a series of TV films from ITV.

In November 2012, it emerged that Atkinson wants a retirement from Mr. Bean. In January 2014, ITV declared a new animated series Mr. Bean with Rowan Atkinson back in the role, which was assumed to be released online as a web-series in 2014.  In October 2014, he appeared as Mr. Bean in the TV advert Snickers. In 2015, he was cast in a sketch for BBC Red Nose Day, along with Ben Miller and Rebecca Front.  In 2017, he appeared as Mr. Bean in the Chinese film Huan Le Xi Ju Ren.

Rowan Atkinson film career started with a supporting part in the “Unofficial” James Bond movie  Never Say Never Again(1983). In 1983, he was cast as a lead role in the movie Dead On Time along with Nigel Hawthorne. He appeared in the 1988 Oscar-winning short film The Appointments of Dennis Jennings.

He further got more attention with his new look as verbally bumbling vicar in Four Weddings and A Funeral(1994) and was featured in Disney’s The Lion King(1994). He continued to appear as a supporting role in several movies like Rat Race (2001), Scooby-Doo (2002), Love Actually (2003) and the crime comedy Keeping Mum (2005), which also starred Kristin Scott Thomas, Patrick Swayze, and Maggie Smith.

In 1997, His television character Mr. Bean debuted on the big screen with Bean, which led to an international success, following the success of Mr. Bean's Holiday. He also starred in the James Bond Parody Johnny English(2006) and the sequel, Johnny English Reborn(2011).

Atikson performed live on-stage skits in The Secret Policeman's Ball in 1979 in London for Amnesty International.  In 1984, Atkinson appeared in a West End version comedy play The Nerd. On 29 November 2012, Atkinson reprised the role of Blackadder at the "We Are Most Amused" comedy gala for the Prince;s Trust at the Royal Albert Hall in London.

In February 2013, Atkinson took a titular role in the play Quartermaine's Terms at Wyndham's Theatre in London with Contleth Hill and Felicity Montagu.

In the 2013 Birthday Honours for services to drama and charity, Atkinson was elected Commander of the Order of the British Empire.

The 63-Years old Rowan Atkinson was married to Sunetra Sastry. The couple first met in late1980ss, when Sastry worked as a makeup artist with the BBC. After several years of dating the couple married in February 1990.  They have two children together son Ben Atkinson and daughter Lily Atkinson.  The pair later separated in 2014 and divorced on 10 November 2015.

After his separation with Sunetra Sastry, he has been in relation with Louise Ford since 2014. Atkinson became the father for the third time in December 2017 with Ford.

Rowan Atkinson has earned a good amount of salary from his acting career. He had a $2.5 million worth Handsmooth house, which include 16 acres land, where he spent £5 million on the renovation.

Atkinson is living with his girlfriend in  £4.65million cottage in North London. Rowan has also sold his former five-bedroom home for £2.9million.

Rowan Atkinson was married to Sunetra Sastry. They first meet when she was working as a makeup artist with the BBC, They later divorced. They have two children together.

Ben is the first child of Rowan Atkinson with Sunetra Sastry.

Lily Atkinson is the second child of Rowan Atkinson from his wife Sunetra Sastry.