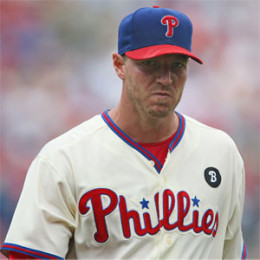 Roy Halladay was an American professional player who pitched in Major League Baseball for the Philadelphia Phillies and Toronto Blue Jays from 1998 to 2013. He died on 7th November 2017 in a plane crash. Halladay was married to Brandy Halladay and had two sons with her.

Roy Halladay was born on 14 May 1997 in Denver, Colorado. He was raised in the suburbs of Arvada. He was born to father, Harry Halladay Jr., who was a pilot in a food processing company and mother, Linda Halladay; a homemaker.

From his early age, he had immense love for baseball and tried every position on the field while playing the game.

By age thirteen, Halladay started training with Colorado baseball guru, Bus Campbell, who helped many major pitchers from the Denver, including Brad Lidge, and Goose Gossage.

At age fourteen, Halladay's success on pitcher's mound had grabbed the attention of major league scouts. In 1995, Halladay graduated from Arvada West High School and was recruited by Toronto Blue Jays in the amateur draft.

On 27 September 1998 in a match against Detroit Tigers, Roy Halladay had two outs in the ninth in the regular season.

Halladay made aq 10.64 run average in nineteen games in 2000. At the starting of season 1, he was offered by Class A Dunedin Blue Jays to remake his delivery.

Roy Halladay continued his game in the season of 2003, scoring a 22-7 record with a 3.25 ERA in 266 innings. He  recorded 204 strikeouts and 32 walks. He pitched first extra-innings shutout in the major leagues since after Jack Morris in Game 7 of the 1991 World Series.

In 2004, Halladay was placed on the disabled list twice due to his shoulder injury. He later disclosed that he was injured throughout the season.

The following year proved to be successful for Halladay, he scored 14-4 with a 2.41 ERA in 19 starts. He was chosen to the third All-Star team and was slated to be the beginning pitcher for the American League at the All-Star game in Detroit.

On 8th July, Roy Halladay broke his leg by a line drive off the bat of Texas Rangers left fielder, Kevin Mench. Halladay was then replaced in the All-Star Game by Matt Clement of the Boston Red Sox, while Mark Buehrle of the Chicago White Sox was selected as the pitcher for American League.

On 16 March 2006, the famous pitcher signed a three-year US $40 million contract. The same year, he completed at the top of the MLB wins with 16 Halladay was listed to the American League All-Star Game as a reserve on 3rd July along with few other teammates from Blue Jays.

In 2007, Halladay was named the American League pitcher of the month, with 4-0 highlighted by a 10-inning full game win against the Detroit Tigers. However, he didn't play as well in his two initial matches in May. He was placed on the disabled list and had to go for an appendectomy.

Later, on 31 May, Halladay returned to his usual form against the Chicago White Sox. He played 7 innings, with six hits, granting no runs to his 100th career victory.

During his third start, Halladay pitched a complete game against the Texas Rangers, in a 4-1 win. The opponent lost three games out of nine due to Toronto's poor offense early in the season.

Halladay was struck in the temple by a line-drive off the bat from Nyjer Morgan on 20 June 2008 against Pittsburgh Pirates. The ball went off the pitcher's head and was caught by the third baseman, Scott Rolen, finishing the inning.

On 11 July 2008, Roy Halladay played his 7th complete game and second shutout of the season opposite New York Yankees, granting 0 runs on 2 hits for his 38th career complete game. Then, he was listed to the American League All-Star Team as a reserve.

In his final start of the season, Halladay fittingly pitched a complete game against the Yankees leading to victory in his 20th game of the year. He also became the first pitcher to achieve victory over five games against the Yankees in a single season.

In 2008, Halladay completed his second season in the American League Cy Young Award voting, behind Cliff Lee of the Indians. Additionally, also became the fourth pitcher in major league history to score two seasons with 200 strikeouts and less than four walks.

On 6th April 2009, Roy Halladay made his team-record Opening Day start for Toronto, winning against Detriot Tigers. After that, he also won his next two starts, on the road against the Minnesota Twins, and Cleveland Indians.

On 12 June, Halladay left the game early due to a strained hip adductor muscle commonly referred to as a pulled groin and was placed on the disabled list on 17 June. On 5th July, he was chosen to represent Toronto at the All-Star Game. He began the All-Star Game for the American League, pitching 2 innings and giving up three runs, 1 run was unearned.

That year, Halladay was named No.7 on the Sporting News's list of the 50 greatest current players in the baseball. On 20 September 2009, he was selected for the second-longest streak in the American League in the season making 24 inning scoreless streak.

On 15 December 2009, the Blue Jays traded Halladay to the Philadelphia for minor league prospects. He signed a contract worth $60 million which includes $20 million vesting option for the fourth season.

On Opening Day, Roy Halladay pitched innings playing opposite to Washington Nationals in his first game with the Phillies. He allowed six hits and nine strikeouts.

He also took his second career RBI and achieved his first victory of the season. He made his start with a complete game on 11 April against Houston Astros and won the game by 2-1. He also pitched his first shutout in the National League, against the Atlanta Braves on 21 April becoming the first pitcher to achieve four wins in the 2010 season.

On 1st May, Halladay pitched his second shutout of the season, limiting the New York Mets to three hits and striking out six. On 21 September, Halladay was the first Phillies pitcher to get victory over 20 games in a season since Steve Carlton accomplished it in 1982.

Halladay was the first right-handed pitcher to achieve the victory since Robin Roberts in 1995. After a week, on 27 September, he finished his 21st victory, collaborating with the Phillies clinch their fourth consecutive National League East title, and the Phillies completed with best regular season record in MLB.

Halladay made his debut postseason start in the Game, One of the National League Division Series, where the Phillies squared off against the Cincinnati Reds. He was the only pitcher with second postseason no-other in MLB history, and the first one since Don Larsen's perfect game during the 1956 World Series.

He only threw 194 pitches and became the first pitcher in MLB history to throw a perfect game and a no-hitter in the same season.

The Phillies defeated the Reds in three games to step up to their third consecutive National League Championship Series, where they played against the San Francisco Giants.

Halladay began Games One and Five, which were considered to be one of the most touted postseason pitching matchups in the recent history as he faced another former Cy Young winner in both games, Tim Lincecum. He lost the game One by 4-3 and won Game Five by 4-2, and the Phillies were eliminated in six games by the Giants, who rolled on to win the World Series.

On 29 May 2010, Halladay pitched the 20th perfect game in the MLB history against the Florida Marlins in Miami, retiring all 27 battelers and striking out 11, allowing no hits runs, walks or errors.

On 24 August 2010, to commemorate his perfect game, Halladay showed more than 60 Swiss-made Baume and Mercier watches he purchased to everyone in the clubhouse.

On 6th October 2010, in his first postseason appearance, Halladay pitched a no-hitter, against the Cincinnati Reds in the first match of the National League Division Series.

Halladay also became the first pitcher since Nolan Ryan in 1973 to throw no-hitters in a season, also the seventh pitcher to hurl both a perfect game and a regular no-hitter in his career, joining Cy Young, Jim Bunning, Addie Joss, Sandy Koufax, Mark Buehrle, and Randy Johnson.

On 24 April 2011, Halladay struck out 14 and granted just 5 hits in the game where his team swept the San Diego Padres in all four games. In May, Halladay became the winner of the John Wanamaker Athletic Award, by the Philadelphia Sports Congress, based on his 2010 season.

In June, Halladay was awarded the Best Major League Baseball Player ESPY Award, for his credits since 2010.

On 5th April 2012, Halladay threw 8 innings of shout ball against the Pittsburgh Pirates on Opening Day, making two hits while striking out 5. On 29 July, Halladay recorded his 2000th strikeout becoming the 67th pitcher in the MLB history to reach the milestone, during a loss to the Atlanta Braves.

On 9th December 2013, Halladay signed a ceremonial one-day contract with the Blue Jays and called for his retirement from baseball because of his injury.

Roy Halladay was a married man. He married  Brandy Halladay in 1998. He had two children, sons; Braden Halladay and Ryan Halladay. He had a good life with his wife and children. Halladay lived in Tarpon Springs, Florida, along with his family.

During his days as a member of the Toronto Blue Jays, Halladay and his wife contributed to Sick Children at Rogers Centre a $100,000 each year under the Jays Care Foundation.

Roy Halladay was named in the Blue Jays' nominee numerous times for the Roberto Clemente Award for his work for the underprivileged children.

On 7th November 2017, Roy Halladay died when the ICON A5 Founders amphibious aircraft which he was piloting crashed into the Gulf of Mexico. During the crash, Only Halladay was in the aircraft. Air traffic controllers received three mayday distress signal before the crash.

Roy Halladay had earned a huge amount of money from his successful baseball career as a pitcher. He played numerous games and made his own records. He made highest earning in 2001-2003, he made $20,000,000 per year.

On 29 May 2010, Halladay purchased a home worth $2,288,500. The house was traditionally designed and built on 1.66 acres. It has six bathrooms, five bedrooms, swimming pool, an exercise room and a guest house. He also had vintage cars like Oldsmobile Toronado, Chevrolet Corvette, and a Roadster.

Currently, Roy Halladay's net worth is estimated to be $70 million. He used to earn $20 million annually as salary.