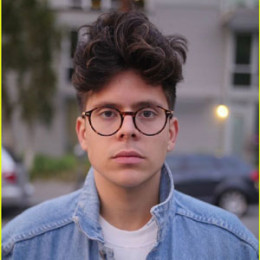 Rudy Mancuso is an American actor better known for the movie The Keys of Christmas and the TV comedy series, Drunk History. He is also an internet personality comedian and musician most notable for his comedic video on YouTube and Vine. Currently, He is dating Maia Mitchell, an Australian actress.

Rudy Mancuso was born on 28th February 1992 and grew up in the city of New Jersey, United States. He is the son of an Italian American father and a Brazilian mother. He also lived in Rio de Janerio for a while. He knows Portuguese fluently.

His grew interested in music from a very early age and started playing the piano at the age of 5.

Rudy started his career as a musician and partnered with Shots Studio to create video and launched his YouTube channel in 2016. He features in Comedy Central’s Drunk History and HBO’s Outpost. He also starred in YouTube Red’s Keys of Christmas along with Mariah Carey and DJ Khaled.

He along with Shots Studio owned Awkward Puppets, a puppet series on the YouTube platform and the host of the show was Rudy himself.

In 2017, he was the opening act for Justin Biber’s Purpose World tour in Brazil’s section of his Latin America show. He was also invited by Dolce & Gabbana to walk in their Milan Men’s Fashion Week Spring/Summer 2018 show on 17th June 2017.

Rude is in a love relationship with Maia Mitchell, an Australian actress, and singer, since 2015. The boyfriend-girlfriend is receiving huge attention from social media regarding their love affair.

They are actively present in each other's Instagram account and share their every romantic moment through Instagram. The couple once broke-up early in 2016 but from the help of a mutual friend, they are together back and stronger than ever.

Rudy is one of the rising stars of future. Day by day, his fan following is growing. He has over 2.5 million YouTube subscribers. In this way, he has successfully collected an estimated net worth of $500 thousand from his career in acting, hosting, comedian and musician videos.