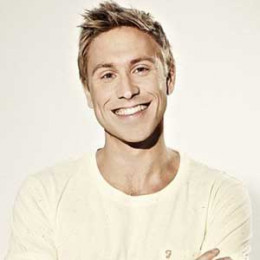 Award-winning comedian Russell Howard presents a show for BBC 6 Music. He is well known as stand-up comedian and star of 'Mock The Week.' He recently launched his own show,' Russell Howard's Good News' which become BBC Threes' highest ever rating entertainment series and also returned for two more series in 2010.

Russell Howard is currently in a married to longterm sweetheart, Cerny Morgan, a medical doctor since June 2019 in a hush-hush ceremony. Lovebird's wedding was attended by some family members and close friends.

Howard and Cerys first met when they were teenagers at a Venture Scout Disco in 2004. At that time, Cerys was 17 when Russell was 21 years of age through Morgan's little sister. Russell dated Cerys for more than fifteen years before they took the romantic affair to the next level. Howard announced on Alan Carr's Chatty Man show that he and Cerny were tying a knot.

Cerny Morgan, an NHS geriatric doctor recently took a sabbatical from her job to go traveling. Furthermore, Russell's sweetheart most recently tweeted a video of distant dancing on the road due to lockdown.

Needless to say, Howard once explained why he likes to keep a relationship out of the limelight and rather not speak about her cause she has a proper job and he is a clown. Nevertheless, neither of the pair lags behind showing affection to one another.

They are still going strong as a couple, and will soon decide to have children. As of April 2020, the Tv presenter and spouse, Cerys is united as life partners for ten months. At present, the cupid resides in Primrose, London.

How Much Is Russell Howard's Net Worth?

Russell Howard's current estimated net worth is $9 million. He earned £4million in just two years. His companies posted profits of nearly £2.5million in the last 12 months alone thanks to sell-out tours, DVD sales, and TV deals. He owns a five-bedroom house in Leamington Spa worth £600,000.

Howard supports Liverpool Football Club. In April 2010, he ran the London Marathon for the first time with both his brother and sister, to raise money for Epilepsy Society.

Russell Joseph Howard was commissioned by BBC Radio 1 to write, sing and perform on the comedy series 'The Milk Run' in 2004. He also appeared on the shows 'Banter and Political Animal ' for BBC Radio 4. He co-hosted 'The Russell Howard Show on BBC 6 Music' with comedian Jon Richardson from November 2006 to July 2008,

Howard Russell made his United States television debut on the 3rd August 2011 episode of Conan. On 30th September 2013, he guest-hosted the second episode of the 27th series of 'Never Mind the Buzzcocks'

Russell Howard was born to Dave Howard and Ninette Howard on 23rd March 1980 in Bristol, England, UK. He has two twins younger siblings Kerry Howard and Daniel Howard. He was born in Bath, but his wider family has always been based in Midsomer Norton.

Howard studied at Perins School in New Alresford and Alton College, in Hampshire and later studied economics at the University of the West of England in Bristol.

Russell Howard is married to girlfriend Cerys Morgan since June 2019. They knew each other and started dating in 2004 at the age of 21.