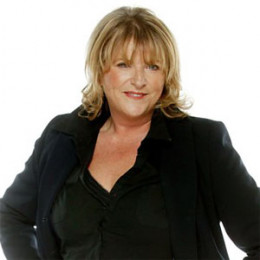 Sally Boazman is a British radio traffic reporter and popularly known as the Sally Traffic among her listeners. She is best known for her show on BBC Radio 2 with more than 8 million listeners. Autotrader UK described her as the 'sexiest voice on the radio, ' and veteran broadcaster Steve Wright called her 'national treasure' who changed the way of traffic reporting in the UK.

Sally Boazman was born on September 13, 1957, in the United Kingdom. Regarding her nationality, she is British and belongs to White ethnicity.

Sally Boazman started off as an actor before starting her professional career as a radio jockey. She also served on the London Weekend TV, as a secretary in current affairs department, but left the job to begin working on radio.

Later, she worked as a traffic news announcer for the Automobile Association and then served as a traffic reporter for some local radio stations before joining the Classic FM.

She made her first presenting role in British Forces Broadcasting Service and subsequently joined the BBC World Service and commercial radio. In 1998, she joined the BBC Radio 2 as the network's first official traffic news presenter.

Besides being a successful radio presenter, she is well-known author and poem narrator too. In 2003, she narrated the poem, Crawl of The Light Brigade for Guide Cats for the Blind. Boazman released her book, The Sally Traffic Handbook in 2007 and the same year she narrated the CD for the Highways Agency called Hear When the Going's Good, advising lorry drivers.

She is active in social work too. In 2007, she cycled across 400 km of Kenya's Rift Valley to support charity Transaid. She was awarded Truck & Driver Driver's Choice award for Best Traffic Information in 2009. In 2011, Boazman presented the documentary, The Road to Nowhere for BBC One which featured her journey around the motorway, examining its economic and environmental impact.

Sally Boazman, 60, lives in Surrey along with his son, Harry (born in 1987). Her son is a famous musician. She is quite secretive regarding her personal life and prefers to keep her private life away from the limelight of media, and that might be the reason she never revealed her relationship status and father of her son. However, many sources claim she gave birth to her boy via insemination.

Boazman hasn't disclosed the concrete figure of her net worth, but as an employee of  BBC Radio 2, she might have earned as much as her colleagues, all of them have a seven-figure net worth. Normally, BBC radio presenter has an estimated salary around £38,146-£41,201.

Harry is the only son of Sally Boazman. He is a popular musician and lives with his mother in Surrey.