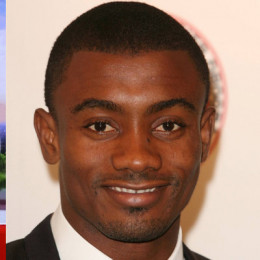 A versatile Ivorian professional football player Salomon Kalou who plays as a striker currently for club Hertha BSC. He has played for many modest clubs including Chelsea. Before starting his professional career he played for local club Mimosas with his brother named Bonaventure Kalou. In the year 2003, he made his professional debut from the club named Feyenoord. He moved to English Club Chelsea in the year of 2006.

Regarding his marital status, he is not married yet but he is dating a beautiful and gorgeous half Somalian model. Except with her, his name has not been linked with any girl or he has not involved in an affair. We can say their relationship is running quite well till now.

In media, the couple has interviewed that they are soon going to change their relationship into a marriage.

He posted an Instagram image with a lady on 2nd January 2019 and captioned the image "My Daughter".

He represented his nation at three FIFA World Cups, the 2008 Olympics, and six Africa Cup of Nations.