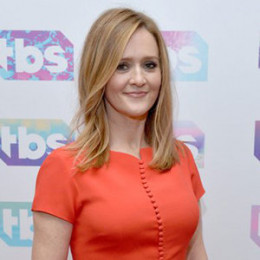 Samantha Anne Bee is a prominent television journalist, political commentator, and comedian. The 50-year-old became the longest-serving frequent correspondent since she joined The Daily Show with Jon Stewart. Except for broadcasting, she has made a number of appearances on films and television series too.

As far as the personal lives of the American multi-talented personality are concerned, Samantha Bee is a married woman. She tied a knot with her boyfriend, Jason Jones.

The pair is bind in the marital relationship since 2001. Bee and her partner dated each other for a significant time before taking their relationship to the next level. "Halal in the Family" star first met her lover in 1996. During the time, they worked in children's theater.

The TV correspondent and her spouse are blessed with three adorable kids. Further, they first celebrated the first Parenthood in January 2006, where they welcomed Piper Bee-Jones.

Two years later in January 2008, Bee announced her second pregnancy in the media and they welcomed their second child, a son, Fletcher Bee-Jones whereas their third child, a daughter named Ripley, was born in late 2010.

As of late December, the family of five resides in Manhattan, New York, U.S. The duo lives a blissful life without any rumors of divorce and extramarital affairs.

How Much Is Samantha Bee's Net worth?

The gorgeous Canadian-American actress and television host Samantha is undoubtedly a million dollar woman. She possesses a net worth of $7 million at present.

She has earned a whopping amount of money during her long days in acting and as per some online sources, Samantha Bee's net worth was estimated to be around $2.5 million in 2017.

The median salary for "The Daily Show with Jon Stewart" correspondent is $112,787 per annum. Except for that, she bagged $35-$100 thousand per hour for starring in movies and TV series too.

Samantha's first work in acting came while she was 26, where she played the title role in the stage production of Sailor Moon.

Bee performed the title role in the Sailor Moon's A cast whereas her future husband Jason Jones was a member of the 'B' cast of the same show.

Later on, she, along with her other partners, founded a Toronto-based sketch comedy troupe 'The Atomic Fireballs'.

Bee's career got a breakthrough after she began working as a correspondent for The Daily Show with Hon Stewart in July 2003, where she demonstrated an ability to coax people into caricaturing themselves.

She worked on the show until 2015. She also worked in numbers of television series and films during the time period which includes Odd Job Jack, Love Monkey, Bored to Death, Phineas, and Ferb.

Bee started working in the series Creative Galaxy in 2013 and she's still working where she works only as of the voice artist.

Currently, she has been hosting the Full Frontal with Samantha Bee since 2016 and she is a creator, writer, and executive producer of the show as well.

Samantha Bee is a Canadian-American comedian, writer, producer, political commentator, actress, media critic, and television host. She was born on October 25, 1969, in Toronto, Ontario, Canada. Bee's parents split up shortly after her birth and she grew up initially with her grandmother.

Bee studied at the Catholic school where her grandmother worked as a secretary. Samantha has both Canadian and American citizenship so we can say she belongs to both nationalities where her ethnicity is white American.

Samantha Bee married Jason Jones, an actor and fellow Daily Show cast member since 2001.Her husband is best known for being a correspondent on 'The Daily Show with Jon Stewart'.

Her daughter named Piper Bee-Jones was born in 2006.

Her son named Fletcher Bee-Jones was born in 2008.

Her daughter named Ripley Bee-Jones was born in 2010.