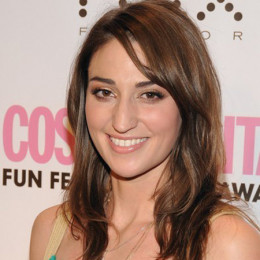 Sara Beth Bareilles is an American singer, actress, songwriter and musician. In 2007, her hit single "Love Song" reached #4 on the Billboard Hot 100 chart which is a huge achievement for her. Till now she is nominated five times for a Grammy Award and has earned a nomination for a Grammy Award for Album of the Year.

Sara Beth Bareilles was born on December 7, 1979, in  Eureka, California in Humboldt County to Bonnie Halvorsen and Paul Bareilles. Her father is an insurance adjuster and mother is a funeral home worker.

She has two sisters along with one half-sister. She is an American and belongs to Italian, English, German, Portuguese, and French descent. She was raised in a Catholic family.

During her early days, she participates in the high school choir, Limited Edition, and local community theater musical productions. In 1998, she completed her graduation from the University of California, Los Angeles where she studied communication studies and was a member of the co-ed a cappella group Awaken a Cappella.

In 2004, the group's rendition of ‘Gravity’ was featured on the ‘Best of College a Cappella compilation’ CD. She performed at the annual student concert UCLA Spring Sing and grabbed her graduate degree in 2002.

Sara Barellis began her singing career in 2002 and after a year she issued her two  2003: The First One in April and The Summer Sessions in October. She recorded her first demo, ‘Careful Confessions’ in 2004 which got the attention of Epic Records, who signed a deal with her in 2005.

In 2007, she released her first album, ‘Little Voice’ and her song ‘Love Song’ was a huge success whereas album gained momentum. Her success with ‘Little Voice’ gave her the opportunity to tour Europe.

In 2009, she earned two Grammy nomination for her single ‘Love Song’ and her song ‘King of Anything’ was also gets nominated for the best female pop vocal performance in 2011.

Later, she released her several albums which were quite successful including; Kaleidoscope Heart, The Sing-Off, Once Upon Another Time EP, The Blessed Unrest, Waitress and What's Inside. In 2016, she released a book, Sounds Like Me: My Life (So Far) in Song’ which was a bestseller.

As she is a popular face in the American Music industry so lots of people want to know about her love life, but as a matter of fact, she has managed to keep her profile low. Until today she hasn't been married to anyone and has no children at all.

There is no record of her past affairs and her current status. She likes her privacy within herself. She hasn't been through any controversy yet.

She prefers to consider herself a feminist and she said,

“I'm not one for seeing amazing, intelligent women being reduced to sex symbols."

She is also a supporter of the LGBT community and actively participates in social work.

Sara Bareilles has an estimated net worth of $16 million while some online sources have mentioned the figure, no official confirmation has revealed about it. She is one of the highest paid singer and songwriter of the era.

She owes her fortune to smart stock investments, substantial property holdings, lucrative endorsement deals with CoverGirl cosmetics. She also owns a house in Venice, which is almost a mansion.