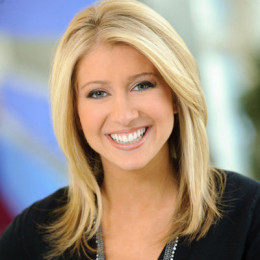 A gorgeous and charming face of American News channel who is recently associated with the CNBC. She was appointed as a news anchor and financial reporter at Bloomberg TV prior working with the TV channel named CNBC. She completed her Bachelor's degree from Medill School of Journalism. She has also completed her Masters degree from Northwestern University. She was listed as one of the best scholars in business studies.

Sara Eisen was born in the 1970's in the United States of America. She belongs to White-American ethnicity.

Sara Eisen's journey in the field of journalism started as a host in the Bloomberg Radio program, On the Economy. She then joined Bloomberg Television as a co-anchor of Bloomberg Surveillance where she also acted as a correspondent for the TV station. During her stay there, she covered the tsunami aftermath, European debt crisis, the Fukushima nuclear crisis in Japan.

In Jan 2013, an article named Currencies After the Crash: The Uncertain Future of the Global Paper-Based Currency System was published by McGraw-Hill which was edited by Eisen. The same year in December she joined CNBC as a correspondent specializing in the global consumer. Besides, Eisen is also a co-anchor of Squawk on the Street.

In Jan 2016, she became the co-anchor of CNBC's Worldwide Exchange, broadcasted from CNBC Global headquarters in Englewood Cliffs, N.J.

Sara Eisen was on headlines when she was caught making embarrassing wardrobe adjustment on camera where she was caught adjusting her skirt. The video can be found on the internet on different sites. Talking about her personal life, she is a married woman.

She is living a blessed life with Matthew Levine. He works as managing director for the Bloomberg. She tied the knot with her husband in May 2016. Talking about their children, the couple became a parent to one child in the month of May.

She and Matthew first bumped into one another while both of them were working in Bloomberg. Though initially, the duo was only friends Matthew was insisting on taking her out on a date.

After a long time, she finally said yes. She once said in an interview,

“We’ve been figuring out how to balance everything and do it all. It’s going to be challenging, but it’s something we’re ready to take on.”

While she was going through her nine months pregnancy journey, she involved herself in prenatal exercises. She is a total health freak and hits the gym on a regular basis.

Though she has kept most of her personal matters secret, it's pretty sure that she's living a happily married life.

Sources say that the couple has a child but details about her kids including his name is still a mystery.

Sara Eisen has served for CNBC for almost four years and from her successful career has accumulated an estimated net worth of $5 million.

Her exact salary for her work in the network has not been disclosed, however, her co-worker who also co-anchors Squawk Box with her, David Faber is paid a hefty salary of $1million. She also is probably paid around the same mark.