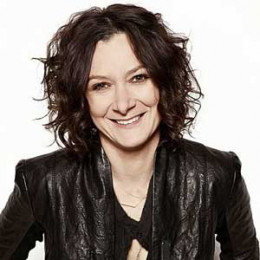 An American actress, Sara Gilbert is also a political activist who focused on environmental, animal rights and public health issues. She started her career at the very early age and is successful now.  Sara is better known as the co-host of the talk show, The Talk too. She was born in a Jewish family, despite she explores all kinds of discipline and philosophies. Sara is officially a lesbian and is married to Linda Perry with 3 children (two from the previous marriage of Sara).

Born to Barbara Cowan and Harold Abeles on 29th January 1975 as Sara Rebecca Abeles, was born at St. John's Hospital and Health Centre, California. She is the granddaughter of The Honeymoon creator named, Harry Crane.

Even Sara took the last name of her mother's first husband. In 1997 Sara graduated from Yale University with honors majoring in Arts and Photography.

Her half-sister Melissa Gilbert was a star on Hollywood Walk of Fame when Sara was at her young age. Sara got impressed by her sister and told her mother about her dream to be an actress. At the age of 6, she debuted from a commercial ad named, Kool-Aid in 1981. Moreover, in 1984, she appeared in the CBS TV movie, Calamity Jane.

Sara earned much of the fame from the lead role in Roseanne. She gave her nine years to this show. Furthermore, in 1989, Gilbert gave her voice to a cartoon series named, The Simpsons as Laura Powers. During 2007-2010 she worked in the TV show, The Big Bang Theory.

Gilbert was also nominated for various prestigious awards and also won Young Artist Award and Television Series TV Land Award. She was nominated for- Best Supporting Actor Female in 1993 by Independent Spirit Awards, also for the Outstanding Supporting Actress in a Comedy Series by Emmy for two years (1993&1994).

She announced leaving The Talk in April 2019 after nine years being the co-host and creator of the show since 2010.

In 2001, Sara dated a television producer, Allison Adler. After that in 2007, they had two children named, Levi Hank (son) and Sawyer Jane (daughter). Alder got pregnant with the help of sperm donation. In 2011, they broke up.

Additionally, Gilbert was in another relationship with an American Grammy-nominated rock-singer, Linda Perry. On 30th March 2014, they got married after 11 months of being engaged.

At the age of 40, she gave birth to a baby boy, Rhodes Emilio Gilbert Perry with the sperm donor. Sara along with Linda is taking care of all the three kids- two from her first marriage.

Gilbert publicly came out as a lesbian in 2010. She realized about her sexuality after dating "The Big Band Theory" star Johnny Galecki.

Sara Gilbert's career is well maintained and established. The actress has an estimated net worth of $35 million as of 2019. She along with her partner sold their Historic Park Hood of LA for $6.85 million. They also sold their mansion too.

Sara Gilbert was married to her girlfriend, Alison Adler. After meeting Alder, Sara finally realized that she is a lesbian. They divorced in 2011 after having 2 babies.

An American Grammy Award-nominated, Linda Perry and Sara Gilbert, married on 30th March 2015 after 11 years of being engaged. They have a baby boy born to Sara with the help of sperm donor.

Sawyer was the first child from Sara Gilbert and Allison Adler. The baby child was born on 2nd August 2007.

The second baby from Sara Gilbert and Allison Alder. HE was born in October 2004.