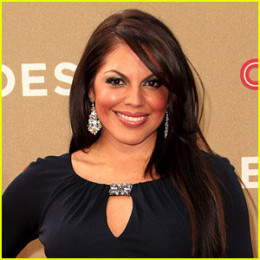 A Mexican singer, songwriter, and actress, Sara Ramirez is currently married to Ryan Debolt since 2012. She is well known for her role as Dr. Callie Torres on the medical drama "Grey's Anatomy" . She was born to Mexican father and mother Mexican and Irish-American descent. At the age of eight, her parents divorced and she moved from Mexico to San Diego with her mother. Sara Ramirez attended Juliard and graduated with a Bachelors of Fine Arts degree in 1997.

Sara Ramirez made her debut on Broadway playing Wahzinak in Paul Simon's "The Capeman" in 1998. She also appeared in Grey's Anatomy and You've Got Mail. She received a Tony Award for Best Featured Actress in a Musical for her portrayal of The Lady of the Lake in Spamalot. Sara Ramirez engaged Ryan Debolt on June 17, 2011, and they were married in 2012. The couple seems to be very happy with each other. She came out as a bisexual in 2018.