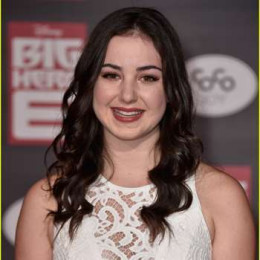 Sarah Gilman is an American actress. She is best known for her role as Dekia in the Disney channel series, 'I didn't do it'. Sarah had her first film debut on 2011, in a short movie, Hold for laughs. Sarah is currently studying film production, screen writting and theatre in University of Southern America. She is interested in athletics and loves to play water polo, basketball, softball, volleyball.

Sarah Gilman is not married yet. She is single. There are no news about Sarah being in a relationship with anyone previously. There has been no rumor and report of Sarah Gilman dating anyone until now. After she tweeted in her twitter account that she has to settle with snuggling giant perry until she gets a boyfriend, made the media and her fans clear that she is in search for a perfect boyfriend.