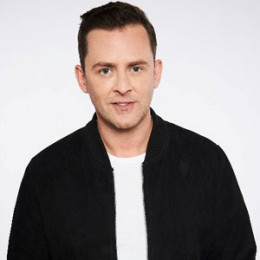 Scott Mills is a British radio DJ, Television presenter and an actor recognized as a BBC Radio 1 presenter. Mills is openly a homosexual. He is in a romantic relationship with a guy named Brad.

Scott Mills was born on 28 March 1974 as Scott Robert Mills. He was born in Eastleigh, Hampshire, England but grew up in Southampton. His parents are not together any longer, however, were featured in the show at sporadic intervals.

Mills started making money at the young age of 16. He began his career as a DJ in Power FM a local Hampshire commercial radio station. He then got an opportunity to present the graveyard slot on the mainstream commercial radio. He then served in the stations like GW FM Bristol, Piccadilly Key 103, and Heart 106.2.

In 1998 Scott joined BBC Radio 1 as a presenter for the early breakfast show. As a replacement of Sara Cox, he took over the weekend early-evening slot. Later the show was renamed The Scott Mills Show and is currently co-presented by Chris Stark. The show featured Laura’s Diary, Flirt Divert, Innuendo Bingo, Rate my Listener and Your Call. Apart from BBC Radio 1, he provides holiday cover for other slots such as The Radio 1 Breakfast Show and the official chart show.

In the year 2009, a musical band performed a musical based on Mills life at Edinburgh Festival. The musical ran for three nights at the Pleasance One Theatre in Edinburgh and also available for viewing on the BBC Radio 1 website.

Other than that, Scott made his appearance in the BBC medical drama Casualty followed by a cameo role in the BBC Scotland soap opera River City. He was seen as a contestant and guest on the shows like Mastermind, Supermarket Sweep, Children in Need, Hollyoaks, Most Haunted and Never Mind the Buzzcocks. He was cast in the show hosted by Donny Osmond. His high-profile program includes the Wednesday night National Lottery draw on BBC 1 and pilot of Reverse-a-Word. Afterward, he hosted a BBC Three television show namely Radio 1 on Three and presented a documentary The World’s Worst Place to Be Gay?. He participated in a dance show Strictly Come Dancing in 12 series and partnered with dancer Joanne Clifton.

Mills won the first episode of Robot Wars Battle of stars alongside Stark in 2016. He actively took part in BT Charity Trek of 2011 Comic Relief Red Nose Day Campaign. He also supported Global Cool, a climate change campaign. He was listed as number 12 on the Independent on Sunday’s Pink List for 2012. He was the 50th most influential gay person in Britain in 2016. He was awarded an honorary Doctorate of Arts from Southampton Solent University in November 2009. In 2016, the bridge crossing the M3 at Fleet services was officially named the Scott Mills Bridge. He was also awarded the Broadcast of the Year by Stonewall Awards as well as Funniest DJ by Loaded Laftas.

In 2001, Scott courageously revealed that he is a gay and doesn’t have much luck with the ladies. He was previously in a romantic relationship with a guy named Mitch. The duo was spending the blissful moment together before his beloved Mitch died one day due to the drug overdose. Mills suffered a painful devastation after his boyfriend’s death.

Currently, Scott is having an affair with a guy named Brad. The couple made their relationship official in 2015. Brad is a retail manager. However, the progress of their relationship is still confidential as they haven’t disclosed much regarding their personal life.

According to The Sun newspaper, Mills received £130,000 yearly for his work with Radio in 2016. His net worth is possibly more than a million.