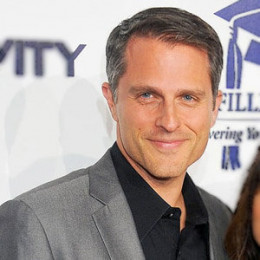 Scott Sveslosky is a lawyer who works for Sheppard Mullin as a partner in their L.A. office. He graduated from the University of Southern California in 1998. He stayed at the same university to attend law school and got that degree in 2001. Mr. Sveslosky has been responsible for numerous aspects of business, antitrust, professional liability, banking, products liability, trade secret, toxic tort and insurance litigation matters and has also served as a technical legal advisor for TV films.

He is recently married to Danica McKellar aka Winnie Cooper. She is an actress famous for The Wonder Years. McKellar and Sveslosky each have a child from previous marriages. She has a 4-year-old son named Draco, while he has a 10-year-old son named Hunter. Both boys participated in the marital ceremony. As for their honeymoon, they decided to stick around Hawaii.

Scott Sveslosky is best known for being the husband of Danica McKellar. There is no information on his birthdate, parents, childhood, and hometown. He earned his law degree from the University of Southern California.

Sveslosky is an attorney in Los Angeles with Sheppard Mullin. He’s a partner in the Business Trial Practice Group. Sveslosky represents clients in commercial litigation cases, including representing the City of Ontario.

Scott Sveslosky met Danica McKellar on a date that was set up by a mutual friend. According to McKellar, it was love at first sight for her. She said she knew Sveslosky was the man of her dreams the moment she saw him. Sveslosky felt the same.

They were engaged in September 2014 and got married in November 2014. Eleven months after they met, McKellar said she had been on cloud nine since the moment they met. McKellar and Sveslosky got married in a small ceremony, attended by just 25 close friends and family.

The couple was so excited to get married that Sveslosky even started wearing his wedding band early. Before their wedding Mckellar revealed in an interview:

The pair took their wedding vows in Kauai, Hawaii at 6:30 a.m. McKellar claimed the wedding was absolutely magical. The forecast had predicted rain, but the skies were clear and the sun was just coming out over the mountains as she walked down the aisle.

McKellar has one child, Draco Verta, from her previous marriage to Mike Verta. He was four when she and Sveslosky were married and recently celebrated his eighth birthday. McKellar often loves to brag about her son on social media. She’s a very devoted mom. Sveslosky also has a child, Hunter Sveslosky, from a previous marriage. Hunter was 10 when the couple was married in 2014.

Scott and Danica divorced their former spouses and when the couple was married, they didn’t just exchange vows. They also exchanged family vows with their sons and had a "sand ceremony" where all four of them poured different colored sand into one vase.

In Sveslosky’s spare time, he helps with charities and advises for TV Films. He does pro bono work in his spare time and is on the board of directors for the Global Hunger Foundation.

Moreover, Scott is an adjunct professor at Woodbury University, teaching conflict resolution to graduate students and an undergraduate course on personal development. He also sometimes works as a legal advisor for TV films, making sure the law is portrayed accurately.

Scott Sveslosky's net worth is not revealed to public knowledge. His source of income includes his salary and earnings from his career as a lawyer. Meanwhile, his wife Danica Mckellar has an estimated net worth of $3 million.

Scott Sveslosky married at a beach ceremony in Kauai, Hawaii. And they were engaged in July 2014.