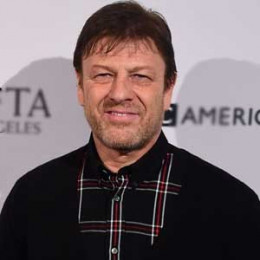 Shaun Mark Bean known by his nickname Sean Bean is an English actor. He played the antagonist role in the blockbusters like Patriot Games and GoldenEye. He appeared in several productions and movies throughout his career and has also successfully established himself as an incredible actor on British Television as well as in the Hollywood industry.

The handsome actor Sean Bean has married five times and divorced four times in his life. Fans are eager to know about the dating history of GOT's Ned Stark aka Sean Bean.

Currently, Sean is married to actress Ashley Moore. The couple exchanged vows on 30 June 2017 after dating for almost five years. The ideal wedding ceremony was held in Axnoller Farm in Dorset. The wedding was attended by forty guests to bless the newly weds.

Sean and his life partner Ashley are united as a life partner for three years now. The lovey-dovey relationship between Bean and his present spouse is still going strong without any rumors of divorce.

Sean then married actress Melanie Hill on 27 February 1990. The couple was blessed with two adorable daughters namely; Lorna born on 1987 and Molly born on 1991. He divorced Melanie on 1997 as he had an affair with another women, Cruttenden.

His third wife was actress Abigail Cruttenden, whom he married on 1997. They shares a daughter Evie Natasha born on 1998. Sean and Abigail parted ways in 2000 citing personal issues.

Soon after that, Bean walked down the aisle with actress Georgina Sutcliffe on 19 February 2008. Seana nd Georgina called it quits after two years of marriage. They divorced in late 2010.

The 58-year-old actor Bean holds an estimated net worth of $20 million. The handsworth, Sheffield native makes big bucks from his career as an actor.

Each episode of the show's eighth and final season cost $15 million. Sean Bean makes an average of $175,000 - $500 thousand per episode for his appearance in HBO series Game of Thrones.

Bean in the initial phase of his career worked as a seller in supermarket and welder at his father’s steel fabrication shop.  Sean made his acting debut with the play Romeo and Juliet portraying the role of Tybalt in the Watermill Theater, Newbury.

Soon thereafter, he worked on several stage productions such as The Fair Maid of the West and A Midsummer Night’s Dream. Sean made his screen debut with the film Derek Jarman’s Caravaggio in 1986 opposite Tilda Swinton.

Bean then performed in an array of movies and television. His fame rose to prominence with his portrayal of Richard Sharpe, in the British miniseries Sharpe.

Afterward, Bean had an opportunity to act with a villain role in the hits like Patriot Games, GoldenEye, and The Island. His role of Ned Stark in the HBO series Game of Thrones earned him critical acclaim. Sean worked alongside Kit Harrington, Emily Clarke, Nikolaj Coster Waldau . In 2014, he was cast as a lead on the TNT series Legends.

Shaun Mark Bean born on April 17, 1959, was raised by his mother Rita and father Brian Bean in Sheffield, South Yorkshire, England. Bean grew up with his younger sister Lorraine.

He pursued his interest in art and enrolled at the Royal Academy of Music and Art in London. Bean also attended Rotherham College taking an art course. Later he got a scholarship at Royal Academy of Dramatic Art (RADA) as a result of his notable performance in the audition.

Lora is the first daughter of Sean Bean with Melanie Hill. She was born in the year 1987.

Molly is the second daughter of Sean Bean with Melanie Hill. She was born in the year 1991.

Eve Natasha is the third daughter of Sean Bean with Abigail Cruttenden. She was born in the year 1998.