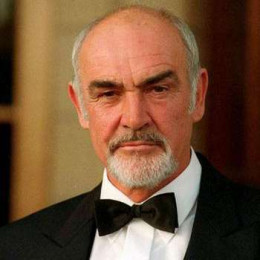 Sir Thomas Sean Connery is a retired Scottish actor and a producer. He is best known for portraying James Bond. His mother Moth Euphemia McBain was a cleaning women and his father Joseph Connery was a worker in factory. He won an Academy Award, 2 BAFTA Award and three Golden Globes. He was proclaimed as the ' Sexiest man alive' by Poeple's magazine in 1999. He retired on 7th June 2007.

Sir Thoman Sean Connery has been giving outstanding performance throughout his work life. Likewise, he has earned a large fan following as James Bond. The rumor about the demise broke the heart of large population. As we can see him fit and fine, the rumors were just airy. Sean has been married two times. He has one son Jason Connery who is an actor.

He married actress Diane Cilento from 1962 to 1973. They have a son named Jason Connery.

He started doing a job as a milkman in  Edinburgh with St. Cuthbert's Co-operative Society and later, he joined the Royal Navy.

He won two BAFTA Awards, Academy Awards, and three Golden Globes till date being an accomplished actor and producer.

Sean was married to Diane for more than 10 years. They were blessed with a son. They are not together now

Micheline and Sean have been married for a long time now. They are still together. They have no children