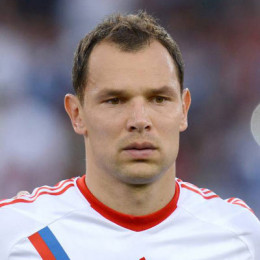 Sergei Ignashevich is a Russian professional football player who is currently playing in the CSKA Moscow since 2004 and in the Russian national team since 2002 as a central defender wearing jersey number 4. He started his career from the club Spartak Orekhovo in the year 1998. He is a very talented and valuable player in the Russian team having a lot of experiences. He is part of the 2018 FIFA World Cup squad of Russia.

He started playing at an early age and joined Torpedo Moscow in 1988 at the age of nine playing in the youth squad. After the end on one season, he joined Spartak Moscow, now one of the most successful clubs in Russia.

Ignashevich debuted professionally playing for Spartak Orekhovo in 1999. He only played 17 games for the club netting 1 goal after which he played for Krylia Sovertov, appeared in 31 games scoring 2 goals.

Ignashevich was suspended for a day as he and Aleksei Berezutskiy were found positive of a prohibited substance following a random doping test after UEFA Champions League match on November 3, 2009. It was late found that they had taken cold medicine which they had forgotten to mention.

Ignashevich made international debut playing in Russia Under 21 in 2000. He played a total of 11 games for Under 21 team.

He debuted in the senior team in 2002 against Sweden. In the UEFA Euro 2004 qualifiers, he played ten games netting 3 goals. Unfortunately, he missed the finals with Portugal. In 2008 he contributed his team to reach the semi-finals.

He was included in the 2004 FIFA World Cup squad, playing his debut match against South Korea on June 16, 2004. In the tournament, he earned his 100th cap, the second player to earn that milestone after Viktor Onopko.

He had retired but came out of it after being called for the 2018 FIFA World Cup to replace injured Ruslan Kambolov.

Ignashevich has earned a good net worth from his career as a footballer which is estimated to be around $2 million, however, the exact amount is not public. He earns a salary of £31k($41k) per week which totals up to £1.48 million($1.96 million) per year.

Sergei Ignashevich is a married man, tied the knot with to his longtime girlfriend, Natalia Ignashevich whom he loves very much. He has four children from his wife. He has been loyal to his wife. He loves to spend time with his wife and children. Ignashevich has not been pulled in any women related rumors or scandals till date. He loves his privacy and keeps his personal life away from the limelight.

He is an active user of Instagram and has accumulated around 70k followers.

She has been his long time girlfriend. They love each other very much. They have four children and are living very happily.

He is the eldest among his children. He is also interested in football. He now attends football.

He is quite young and goes to school with his brother. He is cute and adorable.

She is quite young and goes to elementary school. He is very jolly and often sighted playing with his brothers.

He is the youngest son of his parents and is often sighted with his parents. He is very young.