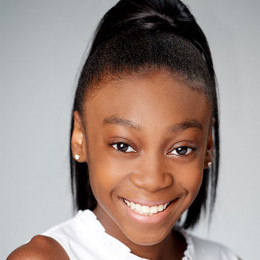 Famously known for providing the voice of Young Nala in the film series, The Lio King, Shahadi Wright Joseph has become fans favorite. At the very short period of time, she became successful to gather a huge fan base and wide acclamation.

The child artist, Shahadi Wright Joseph worked in only a few movies. Within the very short period of time, Joseph has won the hearts of millions of fans.  But what about her loved one and relationship status? ?

The Hairspray Live cast hasn't yet revealed the relationship status in detail but she's way more close to singer and actor, Jahi Winston for a while now. They knew each other for more than a year.

Jahi appeared on Shahadi's socials for the first time in the fall of 2019. She took a snap of herself posing aside her alleged boyfriend donning a custom designed bu Akai Little John on November 16, 2019.  Her caption reads:

"Outtakes from Queen and Slim. Congratulations Jahi Winston Love You So Much!!! You absolutely killed it!!"

The teen actress later was later spotted at Los Angeles, California with the love of her life on March 2, 2020. She shared the picture of two via Instagram, writing "Two nights ago I got the honor of my agents at Abramartistagency. I had such a great time and even better, got to sing duet with my love Jahi Winston".

Eagle-eyed fans began to speculate if the two were really seeing each other, they were caught getting cozy with one another and often featured on their socials.

Joseph is also more focused on her career and he is active on social media with a great fan following. Scrolling her Instagram account, the star is very fashionable and is fond of beautiful dresses.

As she's still a 15-year-old child thus her parents manage her Instagram account where she has 44.1k followers.

Shahadi Wright Joseph has an estimated net worth of $200,000. Her acting career is her major source of income. Moreover, Disney's child actors make an average salary of $5000 to $20,000 per episode.

Joseph's 2019 movie, Us collected $127,844,080 at the box office in the United States with a worldwide total of $174.1 million. The movie was made with a budget of $20 million. The movie starred Lupita Nyong'o, Winston Duke, and Elisabeth Moss.

Check out the interview with Shahadi Wright Joseph: