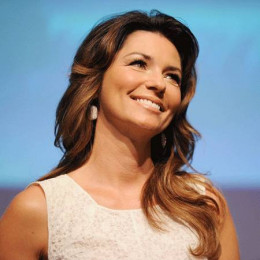 A Canadian Grammy Award-winning singer and songwriter who is widely known for her hit album, Come On Over which became the best-selling studio album of all time. She is daughter to Sharon Edwards and Clarence Edwards. When she was just two years old her parents got divorced and her mother remarried and she was adopted by her step father. When she was young her family back ground was not so solid so she used to sing at bars at the age of 8 to try to help pay her family's bills. In 1983 she graduated from Timmins High she was noticed by Toronto DJ Stan Campbell who helped in her music career. In 2002 she released her music album Up! which was sold twenty million copies worldwide. She is also considered as The Queen of Country Pop.

Her parents divorced when she was just two years of age. She belongs to Irish, French, and English descent.

In 1993, she released her self-titled debut studio album. She rose to fame with her second studio album, The Woman in Me (1995) that she collaborated with her future husband Robert John "Mutt" Lange.

Exploring her personal life she is already married. Actually, she married twice. Her first husband Robert John "Mutt" Lange is song producer and she used to work with him and they became close and got married on 28 December 1993. Together they were parents of one son, Eja Lange.

After she found that her husband is having affair with her best friend Marie-Anne Thiébaud she divorced him. The divorce was finalized on 20 December 2010.

After that, she dated ex-husband of Marie-Anne; Frederic Thiebaud and they got married on 1 January 2011.

Professionally he is a music producer and song writer. He was 17 years senior than her. Together they were parents of one son. After he started an affair with her former best friend they divorced.

Professionally he is a Swiss businessman. He is the ex-husband of her former best friend who had an affair with her husband.

He is the only son from her first marriage.

She is very cute and gorgeous.