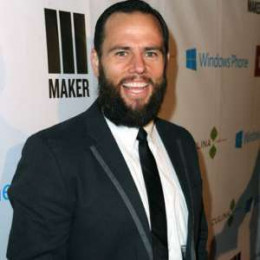 Shay Carl, an American vlogger, YouTuber, and Social Media Personality, is currently married to Colette Katilette Butler since 2003 and has more than 1.5 million subscribers on his Youtube channel "shaycarl". He also appeared in the web series 'The Station' as Randy/Shay in 2009. Shay made his TV debut with "No Ordinary Family" as Security Guard. Despite the news of his cheating, he and his wife are still going strong.

The famous actor has been married to his wife Colette Katilette Butler since 2003. The couple came across sometime during the late 2000s and it was then Shay decided that he will wife her up.

Shay got married to Colette Butler in January 2003 in a close-knit ceremony surrounded by their closed friends and family. They have five children together. As of now, there are no signs of their separation.

Shay's family all together is often called 'YouTube's first family.' That is certainly not an understatement as his kids's lives has been all over the screen, from the moment they opened up their eyes.

In addition, his daughters are already superstars as Emmi was featured in the cover of James Blunt's album Some Kind of Trouble, whereas, Avia released her debut song titled 'Forever Love' in 2014.

As with any other celebrities, it's a rarity to see any celeb bereft of any controversy. Well, for Shay, it nearly cost him his marriage.

So apparently, the guy was cheating on his wife with the adult performer, Aria Nina. Back when Shay was in rehab tackling his alcohol addiction, Aria flashed all of their private messages and everyone in the YouTube community was beyond disgusted by his act.

His wife even posted a lengthy video in which she openly talked about her feelings after the scandal. Check it out!

But despite all that the duo are still together. They took a break from YouTube and it was in this time when both of them talked everything out.

Shay has been uploading videos on YouTube for a long time so it wouldn't be surprising to know if he boasts a net worth of more than a million-dollar. At the moment, his net worth is $25 million.

Shay runs multiple YouTube accounts in which he boasts an incredible over million subscribers.

Shay was born to father Carl Butler and mother Laurie Butler. His parents altogether has four kids out of which Shay is the eldest.

Surprisingly, all of his siblings, Casey, Carlie, and Logan are all active YouTubers as well. It runs in the family! His early life, he traveled to the west indies and worked for The Church of Jesus Christ of Latter-Day Saints. He dropped out of Idaho State University in order to work on his own.

For all the latest and greatest articles on your favorite celebrities, make sure to follow MarriedWiki!!!

He got married to Colette Katilette Butler in 2003. They have five children. Three are boys and two are girls.

Gavin is the first child of the couple. There is not much information about him except some pictures.

Avia is the second child of the couple. There is not much information about her except some pictures.

Emmi is the third child of the couple. She was featured on the front cover of James Blunt's album Some Kind of Trouble.

Brock is the fourth child of the couple. There is not much information about him except some pictures.

Daxton is the youngest child of the couple. There is not much information about him except some pictures. He looks cute in the pictures.