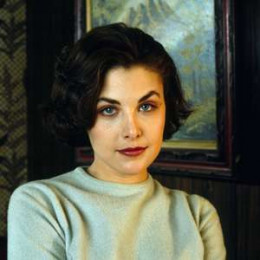 Sherilyn Fenn, an American actress, is currently dating Dylan Stewart, an American consultant, since 2006. She was previously married to Toulouse Holliday, an American musician. Fenn is best known for her role in "Two Moon Junction". She was born to mother Arlene Quatro, a keyboard player, and father Leo Fenn, a rock band manager. Fenn attended the Lee Strasberg Theater Institute before her professional debut. She is possibly single at the moment.

Sherilyn Fenn was Sheryl Ann Fenn was born on 1 February 1965 in Detroit, Michigan under the birth sign of Cancer. She is the daughter of Catholic parents Arlene Quatro and Leo Fenn. Her mother is a keyboardist and father is the manager for rock bands like The Pleasure Seekers, The Billion Dollars Babies, and Alice Cooper.

Fenn is American and as far as her ethnicity is concerned, she is Italian and Hungarian descent from her mother side and Irish and French descent from her father side. She frequently traveled with her two older brothers and mother before they permanently shifted in Los Angeles when she was 17.

Fenn dropped her junior year in order to pursue her career in acting and enrolled at the Lee Strasberg Theater Institute.

She appeared in the film, Wild at Heart along with Nicolas Cage and Laura Dern. In 1992, she shared the screen with John Malkovich and Gary Sinise in Of Mice and Men.

Some of her film credit includes The Wraith, Two Moon Junction, True Blood, Desire and Hell at Sunset Motel, Ruby, Three of Hearts, Cement, The Scenesters, Wish Upon and many others.

In 1998, Sherilyn Fenn returned to television world with series, Rude Awakening where she portrayed the lead role of Billie Frank, a former actress who struggles with alcoholism. In February 2016, she joined the cast of the American version of the Shameless.

Sherilyn Fenn is possibly single at the present. During 1985's she dated popular pop singer Prince for a short period then Hollywood star Johnny Deep in 1986; their relationship lasted for several years.

Later she married guitarist-songwriter Toulouse Holliday in 1994, with whom she has a son, Myles. The couple first met on the set of Three of Hearts. However, the couple failed to handle their married life and split apart in 1997. She also dated computer consultant, Dylan Stewart and shared a son who was born in 2007.

Sherilyn Fenn has an estimated net worth of $500 thousand which she earned from her acting career. She charged a good sum of amount for movies and TV series.

Sherilyn Fenn talked about her TV series, Twin Peaks. Check out the video below,

Sherilyn Fenn was previously married to G. Toulouse Holliday, an American musician, in 1993 but they divorced in 1997. They have two children.

Myles was born on 15 December 1993. There is not much information about him except a few pictures.

Christian is the youngest child of the couple. There is not much information about him except a few pictures