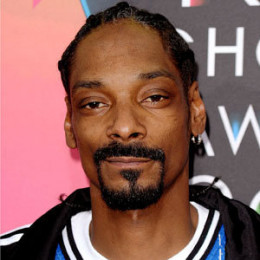 Cordozar Calvin Broadus, Jr. known professionally as Snoop Dogg is an American rapper and actor. He is the son of mother Beverly Broadus and father, Vernell Varnado who was a Vietnam veteran, singer, and mail carrier. His music career began in 1992 when he was discovered by Dr. Dre of N.W.A, and as a result was prominently featured throughout Dr. Dre's solo debut album, The Chronic. Snoop's debut album, Doggystyle, was released in 1993 under Death Row Records, debuting at number one on both the Billboard 200. Recently in March 2016, Snoop was inducted into the celebrity wing of the WWE Hall of Fame.

Snoop married his high school sweetheart Shante Taylor on 12 June 1997, but after some span, he filed for divorce in May 2004. After a few years, the couple renewed their wedding vows on 12 January 2008. The couple has three children together namely Corde, Cordell, and Cori.

Snoop now seems to be living a happy married life. Since his second marriage, he has never involved himself in any kind of relationship affairs and no rumors are heard till the date. To know more about his personal and professional life we can go through his official website.

He came with his first gospel album, Bible of Love in 2018. He received a star on the Hollywood Walk of Fame on 19 November 2019.

Snoop married his high school sweetheart, on June 12, 1997. On May 21, 2004, he filed for divorce from Taylor, citing irreconcilable differences. The couple renewed their wedding vows on January 12, 2008. The couple have three children together.

He is the first son the couple welcomed.

He is the second child the couple was blessed with.

The third child and the first daughter the couple welcomed to the family.