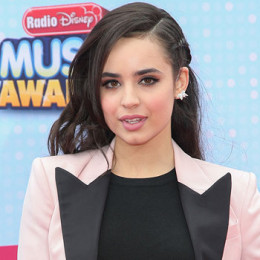 Sofía Daccarett Char aka Sofia Carson, is an actress, dancer, and singer, best known for portraying in the Disney Channel Original Movie, Disney's Descendants as Evie, one of the main character. In 2012, she was signed as a singer/songwriter to BMI. She was trained in dance and vocal performance at the University of Miami’s Musical Theatre Summer Intensive. She is the daughter of José F. Daccarett and Laura Char Carson.

Accounting her personal life, she is yet unmarried. There is no any exact details about her boyfriend till date but these days she is rumored to be romantically linked with an American actor and model Booboo Stewart.

As they are often spotted together at various events and functions, they are rumored of dating each other. We can get updated about Carson simply by following her on Twitter @SofiaCarson.

She studied at St. Hugh School and completed graduation from Carrollton School of the Sacred Heart.