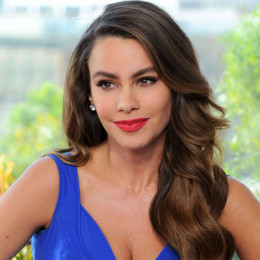 Sofía Margarita Vergara is a popular Colombian American actress and a professional model. Her father name is Julio Enrique Vergara Robayo, a cattle producer for a meat industry and mother name is Margarita Vergara Dávila de Vergara, a homemaker. She studied at Marymount School Barranquilla which is a private bilingual English-Spanish school. She studied dentistry at a university in Colombia but didn't complete her full semester.

She got married at the age of eighteen with her high school boyfriend. They also have a son together. After a long time tragedy of her previous broken relationship, she again dated another guy with whom she got engaged. But the relation didn't last long with him as well. They officially announced that they were separated. She is now engaged with the True Blood's star. They know each other very well. Sofia also celebrated the 200th episode of Modern Family.

She got married to her long time boyfriend at the age of eighteen and have a son together.

She is now in relation with the True Blood's actor with whom she has been with for more than five months.

He was born healthy and is the only son of his beautiful mother. He was born in the month of September.