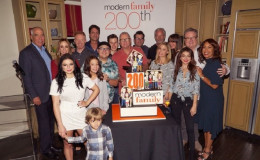 Modern Family: The dysfunctional domestic sitcom which has proved to be one of the funniest and most entertaining shows of this generation, reaches the milestone of 200th episodes!

It was a moment of pride and joy for all the cast members including Julie Bowen, Ariel Winter, Ty Burrell, Sofia Vergara, Jesse Tyler Ferguson, Eric Stonestreet, Sarah Hyland, Rico Rodriguez, Nolan Gould and especially for the showrunners- Steve Levitan and Christopher Lloyd.

January 11 won't be an ordinary day for the Modern Family family because it would be the night the 200th episode of the show, titled "Dear Beloved Family" aired on ABC.

Most of you might have already watched the episode and wondering if season 9 of the show is the final season of the most beloved series. Well, only the show's creators Steve and Christopher have the answer to this question but we are guessing that with such success the show will continue either with spinoffs or something more interesting than that! 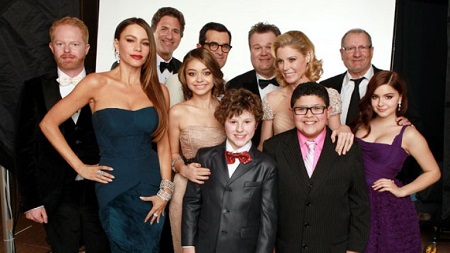 Modern Family has become the ABC's longest-running comedy so far, beating other 400 new and old series that aired in 2017. The entire star cast celebrated the 200th episode of the show and speaking with Hollywood reporter, the show's co-creator Christopher Lloyd stated,

"I often joke with castmembers as we introduce our 198th episode that if we were on Netflix, we would be in our 25th season and Manny would be in his early 40s by this point."

"I think it's a point of pride for us that we can still do quality work in a 24-episode season. In fact, I think there's been a little bit of maybe a rush to reject network television in favor of the Netflix and Amazon series and cable series, as though network stuff is nothing but commercial. I think we still do put out a good product and we challenge ourselves to keep the quality of the show up."

The show's burgeoning actor, Rico Rodriguez who portrays the role of "Manny" on the show posted a heartfelt message on his Instagram.

He captioned the photo with a strong message saying,

"If you would have told me when I started acting 11 years ago, I would eventually be on a tv show that would surpass 200 episodes, I would’ve said you were joking. But, here I am today, asking all of you to celebrate with us and tune into the 200th episode of #ModernFamily airing tonight on ABC!"

Sarah Hyland too posted the pictures of the big event with a heartfelt message expressing how she's "the luckiest person on planet to be able to be a part of such a progressive show."

The show is indeed a perfect family show and we all just don't want the show to end ever. Modern Family airs every week on Wednesday at 9 p.m. on ABC.