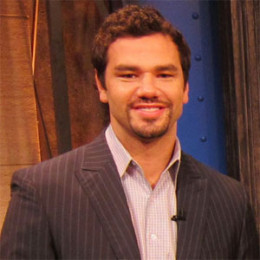 American sportscaster, Spero Dedes is currently working as an employee in CBS Sports. He began his career as a sportscaster at the radio station, WFAN and later joined other various popular networks. Presently, he is serving as one of the announcing team members for NFL on CBS. Dedes is single and not yet married.

Spero Dedes was born on 27th February 1979 in Paramus, New Jersey. He is American and belongs to White ethnicity. Dedes finished his schooling at Paramus High School and in 2001 graduated from the Fordham University in New York.

Spero Dedeas, at present, is working for CBS calling the college football, college basketball, and NFL. He began his sportscaster career after joining WFAN, a radio station in New York City. Dedes then began to appear as a radio announcer for the New Jersey Gladiators of the AFL and later as a fill-in announcer for New Jersey Nets games on the Yes Network.

In 2004, Dedes joined NBC Sports and worked for the 2004 Summer Olympics. He then started serving on various popular networks like Fox and CBS.

In 2009, he joined CBS Sports and became the full-time announcer of the NFL on CBS from 2010. A year later, became the radio voice for the New York Knicks and the voice of the SEC on CBS behind Verne Lundquist. As of 2017, he along with Adam Archuleta calls the NFL games on CBS.

Spero Dedes is very secretive when it comes to his personal life. He has not made information regarding his love life public.

As per the available information, he is possibly single in the present days as was never spotted with anyone in dates. He was also rumored to be gay which he later addressed as false.

According to the social media of Deeds, he posts only about his works, so metaphorically, he is dating his career and is working hard for it. In 2011 Dedes was charged with driving while intoxicated.

Dedes passed a phrase Chink in the armor referring to Knicks player Jeremy Lin, an Asian-American on 1050 ESPN New York on 17th February 2012. ESPN took action against two employees, one suspended and the other fired for using the same phrase, but Dedes was not fired as he was working for MSG (Madison Square Garden).

Dedes, a 38-year-old sportscaster, earns a decent amount from his job as he has served in networks like Fox and CBS.

As per CBS, one of the sportscasters of the network, Jim Nantz earned an annual salary of $5 million. Dedes also must have made a seven-digit figure as he has served CBS for almost a decade. Considering his pay, Spero Dedes surely has an estimated net worth of double-digit million figure.