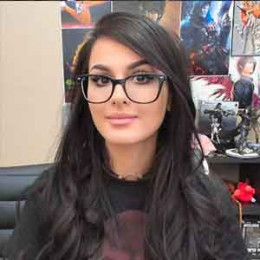 The English YouTuber SSSniperWolf born Lia is known for her gaming and cosplays videos. She entered the YouTube world in 2014 under her gaming username SSSniperWolf which has around 12 million subscribers. In her channel, she posts Call of Duty gameplay videos and had started a video series on the game Metal Gear Rising. She has a secondary channel as well which is named Little Lia where she posts DIY videos. SSSniperWolf has managed to become a household name in the YouTube world and has a huge fan following in all of her social media sites.

SSSniperWolf is not married but she is in an on-and-off relationship with fellow YouTuber Evan Sausage. Due to their similarities in professions, their relationship is going quite strong despite the differences.

The 26-year-old SSSniperwolf is currently in a relationship with her boyfriend, Evan Sausage. He is a hardcore gamer whom she met during her video game series on Metal Gear Rising in 2014 and they started connecting on social media sites.

Finally, they decided to meet up and began dating in real life but they broke up on September 5, 2015. Her boyfriend Sausage was jailed a month later after their break up as he was accused of domestic violence. But some photos on their Instagram proved that they are still together and dealing with their differences together.

SSSniperwolf celebrated her 28th birthday with her boyfriend Evan Sausage on 23 October 2019. They had lunch together at one of the renowned restaurants in the UK. Her YouTube star friend Mariale Marrero arranged the balloons and decorated Lia's room. 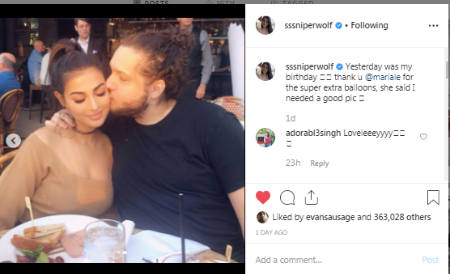 The British social media star holds a balloon on the first picture, whereas in the second picture you may see Evan Sausage kissing her girlfriend's chick. SSSniperwolf wore an open brown t-shirt and short black skirt. Similarly, her beau Sausage wore a black t-shirt and tied up his curly hair back.

SSSniperWolf was caught in some controversies as well. She was sued by Enginmahood in August 2016 for revealing his real name and slandering his name as a sex offender. Later in 2017, she and her ex-boyfriend Sausage was accused by fellow YouTuber Faze Censor for sending him a fake text message.

They were arrested one time too when their neighbors called the cops since they heard loud screaming from SSSniperWolf's house and was guilty of disorderly conduct. 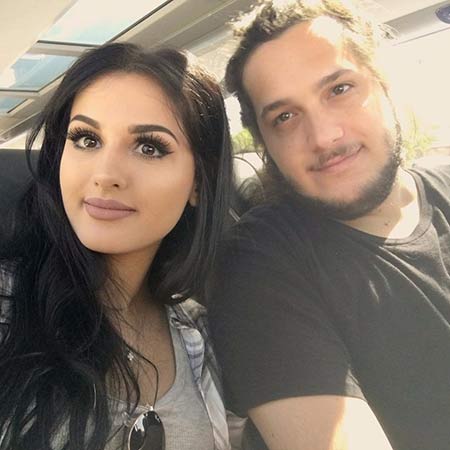 Besides, she also revealed that she hasn't seen a doctor in 12 years since she feels afraid by the idea of doctors. When she was small she was once told to be naked during a checkup in front of her mother which triggered her and found it very uncomfortable so she stopped going to a doctor afterward. She makes sure she is healthy on her own and maintains her diet well.

SSSniperWolf pets two dogs namely Tuna and Kaz whom she loves a lot. She is pretty excellent in hula hooping and had won 1st price in a hula hoop competition when she was in sixth grade. Being a media personality she is pretty active on social media sites like Facebook, Instagram, Twitter and so on. She has around 1.02 million followers on Twitter and 3.6 million on Instagram.

Here is a video of YouTuber SSSniperWolf's channel where she is trying on Fortnite Halloween Costumes.

SSSniperWolf's net worth is not estimated but sources claim it is a 7 figure. Her main source of earning is from her career as a YouTuber. SSSniperWolf earns a revenue of $1500 daily and grabs $550,000 annually.

Besides, she earns her income through various endorsements and advertisements. She had done partnerships with companies like EA, Ubisoft, Disney, and Activism.

Where we going? 🚗 Ps new video up of me getting this car

The 22-year-old internet celebrity generates tremendous sum from ads and endorsements as well. She amassed over 4 million followers on Instagram for which she earns $8,597 - $14,329 per ads post. All in all, She spends money on dwelling expensive designer brands, traveling and exploring varieties of cuisines.

Evan Sausage's girlfriend is a widely popular internet sensation for now, especially on YouTube. Back on July 22, 2019, SSSniperwolf shows what a YouTube career can buy with insane new house tour.

The tour kicks off with a glance at Sniperwolf's front door, a massive glass panel which swings in a hinge found in the middle of the door. Moreover, the interior of the all-white home is mindblowing with glass walls and massive rooms.

Her house comes with an air-conditioned wine cellar, a gigantic master bathroom that includes his and her sinks and toilets, and a bedroom which overlooks their incredible backyard.

Controversial YouTuber SSSniperwolf Shelesh showed her audience how amazing she is living with an incredible tour of her new Los Angeles home. She is a divisive figure among the online community raking millions of viewers with every video she uploads.

SSSniperwolf has found incredible success on YouTube and has shown off what her loyal audience helped her purchase in the form of her new crazy Los Angeles pad.

SSSniperWolf is professionally a YouTuber who is known for posting Call of Duty gameplay videos on her YouTube channel. She also posts videos related to anime and video game character cosplays. Her cosplay videos include a cosplay video titled Misty Cosplay Black Ops 2 Zombies where she cosplayed as Abigail Misty Briarton.

It was in 2013 when she first entered the YouTube world and rose to fame after her content which was related to video games and cosplays got the attention of plenty of individuals. She started a video series on the game Metal Gear Rising which grabbed the eye of the gamers and soon the number of subscribers on her channel started growing. In her channel, she has around 12.4 million subscribers and more than 2.5 billion views.

She has another channel as well which is named Little Lia where she posts DIY videos, food recipes, crafts and so on. Her second channel has also managed to earn 676k subscribers. For her popularity in the YouTube world as a gamer, she was listed in the Top Influencers of Forbes magazine in the gaming category.

SSSniperWolf was born Lia on October 22, 1992, under the birth sign Libra in England. She was raised alongside her sister and began playing video games at the age of 6. Her father even gifted her a PlayStation when she was eight years old.

As for her studies, she still hasn't graduated due to lack of interest and since she wasn't happy with the college's environment. She had enrolled at a university to gain a degree as a pharmacist but later on shifted her focus to nursing but didn't complete that as well since she wanted to take a break. Then some years later she decided to major in game design but haven't completed that as well.

She played video games under the username Sniper Wolf which is the name of the character of her favorite video game, Metal Gear Solid. SSSniperWolf also has two younger brothers and after their birth, the whole family moved to Arizona where they are residing till present.