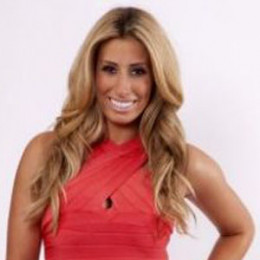 Stacey Solomon is popularly known as the English singer and TV star. She came into limelight after her appearance in the sixth series of The X Factor where she grabbed the third place.

Stacey Solomon was born as Stacey Chanelle Charlene Soloman on October 4, 1989, in Dagenham, Greater, London, England, to David Solomon, a photographer and Fiona Soloman, a nurse. She is an English by nationality and belongs to White ethnicity.

Her parents got divorced when she was nine and started living with her mother. She graduated from the King Solomon High School.

Solomon first auditioned in 2009 for the sixth series of The X Factor where she succeeded to stand in the 3rd position. Her popularity from the show encouraged her to start a career in music fraternity.

She released the cover of Michael Jackson's "You Are Not Alone" which gave her new height of popularity because her single topped the charts on the UK Singles Chart and the Irish Singles Chart. Later, she participated in the TV reality series I'm a Celebrity...Get Me Out of Here where she was named "Queen of the Jungle" as she won the show.

Soloman released her debut album Shy in April 2015 and following year she released her second single from the album, My Big Mistake.

Soloman is in a romantic relationship with her boyfriend, Joe Swash. The duo had been dating since November 2015 and still, their relationship is going smoothly. Previously, she was engaged to Aaron Barham with whom she has a son; Leighton Barham. However, the couple split up after four years of relationship.

At first, she dated Dean Cox, but due to some personal issue, they had broken up after two years of relationship. She has a son with Cox, Zachary Solomon. Once, Stacey was rumored to dated Jackass Star, Steve-O but both of them never confirmed it.

Stacey Soloman receives a good amount of salary from her career. As of 2017, her net worth is estimated around $500 thousand.