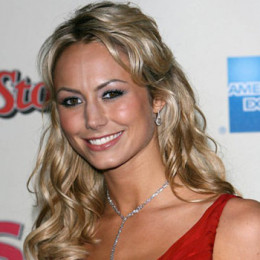 Stacy Ann-Marie Keibler is a model, dancer, actress and retired professional wrestler, noted for her work with World Championship Wrestling and World Wrestling Entertainment as a WWE Diva. She is also known as a contestant of Dancing with the Stars (Season-2), where she placed third. As a model, she has been featured in LA Times, Fitness, Esquire, Elle Girl, Parade, Maxim (UK) and Cosmopolitan. She was born to Patricia and Gary Keibler.

Accounting her personal life, she is a happily married woman. Few years back, she married her boyfriend who is a popular businessman of America. They have raised a daughter from their marriage. There is no point on talking about their divorce, as their marital relation is going on very well. Before marrying her husband, she was romantically linked with Jamie Foxx and Kevin Connolly, but none of them spoke about their relation.

He is the one and only beloved husband of Keibler, whom she married in 2014 at Punta Mita, Mexico. He is the CEO of Future Ads.

She is the only child of Keibler, whom she gave birth at the age of 34.