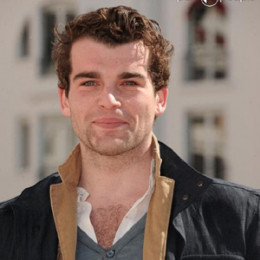 Stanley Weber, 32, is a French actor and theatre director. He is well known for his portrayal as Juan Borgia in the famous television series, Borgia. Debuted through theatrical acts, he made his appearances in several TV series as well.

Best known for his performances in The First Day of the Rest of Your Life and Violette, he is gaining wide attention from fans and media.

Born on 13 July 1986 in Paris, France, Weber is the son of Jacques Weber and Christine Weber. His mother is a housewife, and his father is a renowned French actor. He has a sister named Kim and a brother named Tommy. He holds French nationality and belongs to Caucasian ethnicity.

Weber was interested in acting from his early age. He attended a private drama school in Paris, Cours Florent. He has featured in numerous movies and has done several theatres works.

In 2006, Weber featured in a short movie entitled Mauvaise Prise, which was directed by Benoit Jeannot. The following year he was seen in Tim, directed by Jacques Girault. His role in The First Day of the Rest of Your Life directed by Remi Bezancon helped him to receive Cesar Award nomination.

Besides, the promising actor has featured in a British drama entitled Agatha Christie’s Poirot. The drama aired on ITV from 1989 to 2013.

As far as Weber’s personal life, he is not married. He is pretty uptight in sharing his details. Previously, he dated Karen Gillan, an actress. They started dating each other from 2013 but kept their relationship status secret. They ended their relationship after a spending one year together.

Currently, he is not found dating anyone, as he is focused on building his professional career. He has not mentioned about having an affair or girlfriend in the past.

Weber is 6 feet 1 inch in height. He has Blue colored eyes with Light Brown colored hair. His net worth is yet to be revealed.