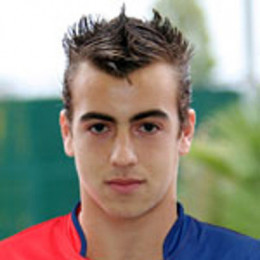 He is an Italian professional football player who is currently playing in the Italian Serie A Club Milan since 2011 and in the Italian National football team as a striker. He has a nickname of Il Faraone (The Pharaoh) for his father is an Egyptian. He started his youth career at Legino in 2001 and then moved to Genoa in 2006 from where he started his senior career in 2008. He has represented Italy in different age groups of national team and has been inducted in the senior team since 2012.

He, at the age of nine, joined the youth academy of Legino and when he turned 14 moved to Genoa. He debuted for the club when he was 16, playing in a Seria A match against Chievo, though he only played for ten minutes. As of 2018, he is ranked eighth in the list of youngest player to debut in Seria A.

In June 2010, he was transferred to Serie B club Padova on a season-long loan. He grasped the opportunity play for the club and established himself as a key player for the club leading them to promotion match finals against Novara. Though they lost to Novara, he was honored with 2011 Serie B Player of the Year.

On June 25, 2011, he signed a contract with A.C Milan for a fee of €20 million, made a debut on September 18, 2011, in a 3-1 loss against Napoli. His first goal came against Udinese, coming in for Alexandre Pato. He renewed his contract with Milan on July 25, 2012, for five years and the October of the same year he scored his first UEFA Champions League goal against Zenit which made him the youngest Milan player to score in the competition at 19 years and 342 days. He also helped his club win a crucial match against Napoli netting two goals. He was at his first form during the first half of the 2012-13 season, scored 14 goals in the league and 16 in all competitions making him the top scorer of Serie A and top scorer in all competitions. However, he failed to maintain the same form for the rest of the season.

The following season he suffered an injury and had to undergo surgery on the right foot which kept him out of action for ten weeks. He returned to play on May 11, 2014, against Atalanta. He ended his dry spell on November 8, 2014, scoring after 622 days. He played a total of only 28 matches throughout the 2013-14 and 2014-15 season.

On July 13, 2015, he was loaned out to Monaco with an option to buy. He debuted after two days against BSC Young. On January 26, 2016, he was again loaned to Roma for a reported fee of €1.4 million with an option to sign him for a fee of €13 million before the start of 2016-17 season. His first goal for the club was from a half scorpion back heel kick against Frosinone. He was later bought by Roma for a fee of €11.7 million. After signing her scored twice for Roma against Chievo on May 20, 2017.

He debuted in the senior team on August 15, 2012, in a 2-1 loss against England. In his third appearance, he scored his first goal for Italy against France. He played in 2013 FIFA Confederations Cup but was excluded from the 2014 FIFA World Cup squad due to injury. He scored his second international goal on October 10, 2015, after three-year goal drought, against Azerbaijan.

There is no information available on his relationship status. It is not known whether he is married or is in a relationship and has a girlfriend or is single. He has remained discreet and avoids the public attention in his private life. He loves his privacy and keeps his personal life out of professional.

However, in 2013, he started dating Ester Giordano. The pair often displayed their love by posting lovey-dovey pictures on their Instagram. They also went on a holiday together. But they seem to have broken up, but the reasons for their breakup is not public.

Besides his earning from his club, El Shaarawy also makes a good sum from his endorsement deal with Nike. In November 2012, he appeared in an advertisement for Nike Green Speed II alongside Theo Walcott, Mario Götze,  Raheem Sterling, Christian Eriksen and, Eden Hazard.