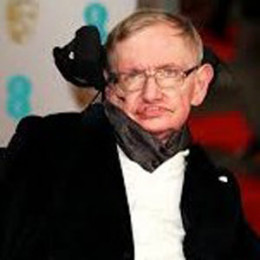 Stephen Hawking is a British theoretical physicist, cosmologist, author who has made a great contribution to the science and technology, and mankind. He is one of the incomparable scientists alive.

Stephen Hawking was born Stephen William Hawking on 8 January 1942 to Frank and Isobel Hawking in Oxford England. He grew up with his two younger sisters and an adopted brother, Philippa, Mary and Edward. As a creative child, he was fond of board games, the manufacture of fireworks, model airplanes and boats and a long discussion about Christianity and extrasensory perception.

He built a computer from clock parts, an old telephone switchboard and other recycled components with the help of their mathematics teacher, Dikran Tahta.

He obtained his first-class BA degree from the University College, Oxford.  While in University, he was interested in classical music and science fiction. He joined the college boat club namely University College Boat Club coaxing a rowing team. He received a research fellowship at Gonville and Caius College.

He earned his Ph.D. degree in applied mathematics and theoretical physics from Trinity Hall, Cambridge. He wrote his thesis on a theorem of a spacetime singularity in the center of black holes inspired by Roger Penrose. His essay namely Singularities and the Geometry of Space-Time shared top honors and won year prestigious Adams Prize.

Stephen is a British scientist, professor, and author. His research work on the Universe and Black Holes gained him a wide range of recognition in the scientific world. He collaborated with Roger Penrose while doing the research. He was awarded several titles for his incredible work.

His radiation theory gained him a title fellow of the Royal Society and the prestigious Albert Einstein award. He also obtained teaching stints at Caltech in Pasadena, California and Gonville and Caius College in Cambridge.

He received the Presidential Medal of Freedom in the US.  He was listed as number 25 in the BBC’s poll of the 100 Greatest Britons in 2002. In between 1979 and 2009, he worked as the Lucasian Professor of Mathematics at the University of Cambridge. He discussed his own the theories and cosmology while teaching. In between 1975 and 1990, he was awarded Eddington Medal, Pius XI Gold Medal, Dannie Heineman Prize, the maxwell Prize and the Hughes Medal.

Besides that, he also made a guest appearance on The Simpsons, Star Trek: The Next Generation and Late Night with Conan O’Brien. He was regularly interviewed for print and television. In 2012, he appeared on The Big Bang Theory. He earned kudos for his effort in the show.

In 2014, a film based on Hawking and his ex-wife Jane entitled The Theory of Everything was released. He then hosted and narrated Genius, a six-part Television series. He participated in a trial of new headband-styled device iBrain in 2011.

Jane Wilde is Hawking’s first love and first wife. She is the sister of his friend and the duo shortly met before his diagnosis with motor neuron disease. They engaged in 1964 whereas tied the knot after a year of their engagement in 1965.

The couple often traveled to the United States for conferences and physics related visits. They have three children Robert, Lucy, and Timothy. They divorced in 1995 as both the husband and wife developed an interest in the third person rather than themselves.

Elaine Mason is the second wife of Stephen. They married in September 1995. Prior to their marriage Mason used to be a nurse of Hawking. Their divorce finalized in 2006. He stayed in contact with his ex-wife Jane after his separation from Elaine.

Hawking was diagnosed with motor neuron disease when he was a graduate student at Cambridge in 1963. He was only 21 at that time. The disease was a slow progressing form of amyotrophic lateral sclerosis (ASL). It gradually paralyzed him over the decades.

According to the doctor's prediction, he would live only for two years. But he still alive till the date which proved the assumption wrong. He accepted and fought his disease and stands fiercely independent all this time.

He also suffered from pneumonia which was life-threatening in his case and underwent tracheotomy due to which he cannot speak. In 1986 he received a computer program, the Equalizer from Walter Woltosz which helped him to communicate his words and thoughts to other people. He also experienced increased breathing difficulties requiring the ventilator at times and has been hospitalized numerous times.

As one of the most brilliant theoretical physicists in history, Stephen earns jaw-dropping amount from his career. Currently, he holds the staggering net worth of $20 million.

Rober is the first child of Stephan from his ex-wife Jane Wilde. He was born in May 1967.

Lucy is the second child and oldest daughter of Stephan from his ex-wife Jane Wilde. She was born in 1970.

Timothy Wilde is the third and youngest child of Stephan from his ex-wife Jane Wilde. She was born in 1979.