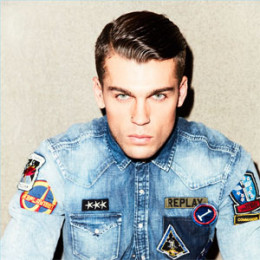 Stephen James is a British model. He is also former professional footballer well known as the winner for international youth caps for Scotland.

Stephen James was born on 4 December 1990 in Hammersmith, London, England. He is of Caucasian ethnicity and holds British nationality.

Stephen James was very much interested in football since his early age.

In October 2007, Stephen James was called up to the Scotland U18 squad for a four-way international tournament in France. He made international debut when he came on for Michael Graham after sixty-five minutes of the second match of the competition.

Former Midfielder, James was a member of the youth team at Brentford before he was released in 2008. He also went into the youth system at non-league club AFC Wimbledon, before making his professional appearances with Cypriot First Division side Nea Salamis Famagusta.

In September 2012, Stephen James was spotted in Barcelona by an Elite Model Management agent, and since then he is working as a full-time model. His credits include Takeshy Kurosawa, Calvin Klein, Diesel, Phillip Plein, GQ Germany, ASOS, GQ Spain, and XTI among others.

Stephen James is currently dating Irina Shayk, a famous Russian model. The pair began dating from 6th Jan 2016, Shayk's 30th birthday. They both knew each other since Shayk's relationship with her previous boyfriend, Bradley Cooper.

The couple often spend time with each other, as they are seen on vacations, birthday celebrations, sharing their happy moments.

Stephen James earns a good amount of money from his career as a model. He is also known as the tattoed model. He generates $55,705 on average. Although he could only play football for five years due to his injury, he made a reasonable amount form it.

Stephen James' exact net worth is not public but it is assumed to be a seven-figure amount.