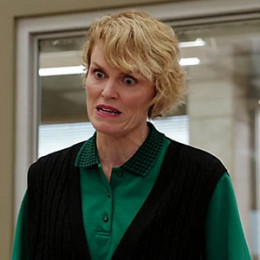 Stephnie Weir is best known for her six-year-long association with the Mad Tv sketch comedy series. She became famous for her comedic impressions of Anna Nicole Smith, the Olsen Twins, and many other celebrities.

Talking about her relationship status, Stephnie has married twice in her life. She was first married to Sean Benjamin in 1989. Due to some problems in their marriage, they got separated in 1995.

Afterward, Stephnie started dating Robert Dassie, an actor, and writer. They tied the knot in 2001. The couples don't share any child yet. Prior to this, there are no extramarital affairs related to the life of Stephnie. Currently, she is married and living happily with her husband.

Stephnie Weir and her husband at Emmy Awards,
SOURCE: Zimbio

Concerning her net worth, Stephenie is active in the film industry since 1992. She played in big TV series like Happy Together and Big Day and from this, she received a good remuneration. However, she has not disclosed her salary and net worth.

In addition to this, Stephenie and her husband bought a house in the bustling city of Burbank in California, United States. The median price of houses at Burbank is around $800k.

Moreover, the average salary of actresses in the United States ranges from $13.99 per hour to $40 million per film. From this, we can say, Stephnie's net worth might be around $500k.

Stephnie Weir was born on November 28, 1967, in Odessa, Texas, United States. Her nationality is American and ethnicity/race is white.

Her birth name is Stephnie Carmel Weir. Stephnie's mother name is Sharon Weir and her dad's name is unrevealed. The actress's birth sign is Sagittarius. There's not much information available regarding her childhood days as she maintains her life private from social media.

Concerning her education, Stephnie went to Odessa College in the United States. She majored in theater and broadcasting. Afterward, she went to Southern Illinois University Edwardsville, United States, where she studied anthropology and women's studies. She even started performing in the ImprovOlympic at the same college.

Stephnie Weir was in a married relationship with her ex-husband, Sean Benjamin since 1989 but they later divorced in 1995.

At the moment, Stephnie Weir is married to Robert Dassie. The couple tied the knot in the year 2001 after years of dating.