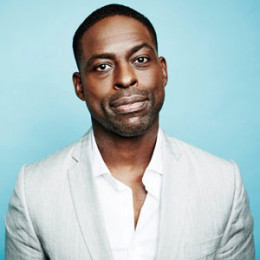 Sterling K. Brown is an American actor famous for his role Christopher Darden in The People v. O. J. Simpson: American Crime Story. He is married to an American actress Ryan Michelle Bathe.

Sterling K. Brown was born on April 5, 1976, in St. Louis, Missouri. He is the son of Sterling Brown Jr. and Aralean Banks Brown. He was nicknamed Kelby while a kid. He grew up along with his four siblings, two sisters and two brothers in Olivette, Missouri. Their father passed away when Brown was ten years of age.

Brown attended St. Louis Country Day School. He graduated with an acting degree from Stanford University in 1998 and later earned his MFA from Tisch School of the Art.

Sterling began his career working in regional theatre. He then went on to feature in TV shows such as  ER, NYPD Blue, JAG, Boston Legal, Alias, Without A Trace, Supernatural, and Third Watch. He became, the regular cast of comedy Starved.

Afterward, Brown made his appearance in the movies including Stay, Brown sugar and Trust the Man. He got to play a recurring role on the TV series Supernatural followed by Amy Wives.

He appeared in Person of Interest as Detective Cal Beecher. Furthermore, he featured in Patience in 2008. In 2016 he played in FX miniseries The People v. O.J. Simpson: American Crime Story. He received  Primetime Emmy Award for Outstanding Supporting Actor in a Limited Series or Movie at the 68th Primetime Emmy Awards.

Besides that, Sterling portrayed the role Hero in the Public Theatre’s play Father Comes Home From the Wars.

Sterling K. Brown is a married man, he exchanged a vow with his college sweetheart Ryan Michelle Bathe in June 2007 at an intimate ceremony in the presence of their closed ones. Bathe is an actress by profession best-known for her roles on TV.

The duo is proud parents of two children. Sterling currently resides in Los Angeles California along with his wife and kids.

The Primetime Emmy winner, Brown certainly earns a good sum from his acting career. He has appeared in many hit series from which he has probably maintained a net worth more than in six figures.