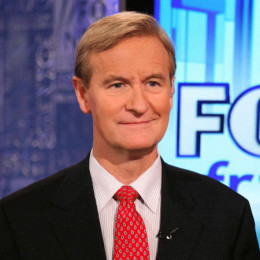 An American network-television personality who became popular as the co-host of Fox & Friends. He completed his high school from Clay Center, Kansas. He holds degree of BS in Journalism from University of Kansas, in Lawrence. He started his career as on-air DJ for KJHK radio. He debuted in on-screen broadcasting from CBS-TV's flagship station, WCBS-TV, in New York City. He is also former co-host from Wake Up America on NBC cable. Beside broadcasting he is also popular author and his book Mr. and Mrs. Happy Handbook and Tales from the Dad Side has charted in New York Times bestselling books. Currently he is the regular host of Fox News Channel's weekday morning wake-up show.

Exploring his personal life, he is a happily married man. He is married with his long-time girlfriend who is very supportive to him. Together the couple has given birth to three children. The couple seems to be very happy with each other and there has been no report of any kind of affairs from both sides. One of his son following his path has became his fellow Fox News reporter.

They first met each other at WRC-TV in Washington, D.C. They have already passed three decades of their successful marriage. She has given birth to three children.

He is the eldest child of the family. Currently he is working as a general assignment reporter for Fox News Channel.

She is very beautiful. Her picture along with family can be found in different sites.

She is the youngest daughter of the family. She resembles more like her mother.