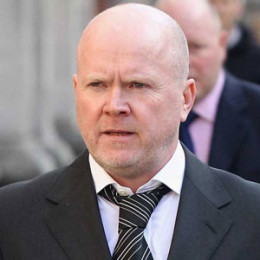 Steve McFadden is famous for his role as hardman Phil Mitchell in the BBC soap opera EastEnders. He was also the presenter of fighting series Britain's Hardest and has appeared in the television series like The Bill, Minder, and Bergerac.

Steve Robert Reid, known as Steve McFadden is an English actor born on 20 March 1959 in Maida Vale, London, England to father Robert and mother Barbara Mallet Reid. Later, his parents separated and his mother married John McFadden, from which Steve got his surname.

In 1975, he left school and worked in several fields like laboring, plumbing, and served at builder's merchant. He did not get any satisfaction from all these works, so he sold his bike and hitch-hiked around Europe. He camped for several months in France, Montpellier on land earmarked for building a football stadium. Later he returned back to London and went to a Job Centre, seeking a job.

His first job was on the "Acorn Project", a scheme for the blind people which involved attending college. He passed gaining 'O' and 'A' Level in Sociology and Politics before joining North London Polytechnic on an Economics course. After seven weeks, he realized that the course was not for him and withdrew from the university.

He decided to be an actor and was accepted in RADA(Royal Academy of Dramatic Art) in 1984, where in his first year he won a prize for producing his own drama piece named "Best Fight", which involved many characters, played by his friends in school.

In 1987, he graduated from RADA. In 1988, he made his acting debut playing a small role in the television film The Firm. The same year he made his brief appearance in the film Buster, where he portrayed a gang member. He later appeared in several televisions series like The Bill, Minder, and Bergerac and also in Kevin and Perry Go Large as a doorman.

Steve became famous after playing 'hard man' Phil Mitchell in the BBC soap opera EastEnders. He joined EastEnders in 1990. Later, in 2001 he appeared in an episode of BBC One anthology series Murder In Mind.

In 2003, he left EastEnders for a year to focus on pantomimes. During the break, he hosted the reality television fighting series Britain's Hardest, which was an underground competition aired on Sky One. Later, in April 2005, he returned to EastEnders for two episodes.

In 2007 he made his appearance in the film Provoked. He also appeared in pantomime in 2010/11 at the High Wycombe Swan theater in Peter Pan playing Captain Hook. Later, he appeared at the Orchard theater Dartford in Aladdin playing Abanazar with a cast involving 16 children, who attended The Liz Burville Performing Arts Centre, Old Bexley Kent.

The 58 years old, Steve McFadden is not married yet but has been in several relationships. He has dated 4 women till date including a live-in relationship. He has 5 children from his several affairs.

He was first in a relationship with his childhood friend Seu Marshall, with whom he experienced his first fatherhood. In 1985, the couple welcomed their first child son named Mattew McFadden. Later, the couple broke up.

His second girlfriend was Angela Bostock. The couple welcomed their first daughter in August 1997 named Teona McFadden and later welcomed their second daughter Mollie Patrice McFadden in May 2004.

After, his separation with Angela, he dated Rachel Green. On 29 June 2009, she gave birth to Steve's daughter Amelie Tinkerbell McFadden. However, the pair broke up, the reason trusting issues.

He and his girlfriend Karen Cairns welcomed a daughter Frankie McFadden in May 2016.

McFadden is also a supporter of Manchester United Football Club. He is also interested in sailing and has taken part in the Thames Diamond Jubilee Pageant in his motorboat 'Barbara'. In 2014. he sued, News of the World and the Metropolitan police when one of the police officers told the details about him to the newspaper.

Mattew McFadden is the first son of Steve McFadden from his first relationship with Seu Marshall.