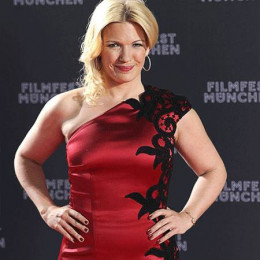 A beautiful German presenter who is working at Sky as a presenter and moderator of the German Soccer League. She is also presenter of the Europa League, the DFB Cup and the Champions League. In 2000 she graduated from Ludwig Maximilians University in Munich in journalism. In starting of her career she worked as a trainee at the daily newspaper 'Die Rheinpfalz'. Between 2000 and 2003 she worked as sports editor of the Bild newspaper.

Exploring her personal life she has not married yet but smoking hot presenter is in relationship with her long time boyfriend. It means she is currently off market. Beside him there has been no report nor rumor regarding her affair with anyone. It seems like they are made for each other. Couple's picture can be found in different sites. She has not yet been a biological mother nor she has adopted one.