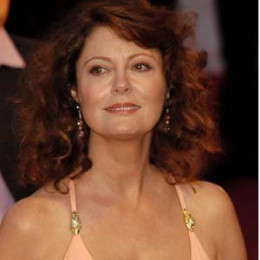 An Academy Award and BAFTA Award-winning American actress, Susan Sarandon is popular in the world for portraying her role in the movies Lorenzo's Oil, The Client, Dead Man Walking and many more. She began her career in the 1970 film, Joe, before appearing in the soap opera A World Apart. She graduated from Edison High School in 1964. She is also known for her social and political activism for a variety of causes. She was appointed a UNICEF Goodwill Ambassador in 1999 and received the Action Against Hunger Humanitarian Award in 2006.

Susan Sarandon was once married to Chris Sarandon. He is also a renowned actor from the United States. He is popular in the world for his role in The Princess Bride. They dated each other for a few years and then finally got married in 1967. But this married life was dissolved after being married for more than a decade. After this, she was found dating Louis Malle, David Bowie, and actor Sean Penn. And also she has many children from this sorts of relationships.

She gave birth to daughter Eva  Amurri while in a relationship with Italian filmmaker Franco Amurri on 15 March 1985.

Later, she started dating actor Tim Robbins who she met while playing in Bull Durham in 1988. They lived together until 2009 and broke up. Following the unexpected split, she came close to Jonathan Bricklin, son of Malcolm Bricklin.

She has received an Academy Award, a Screen Actors Guild Award and a British Academy Film Award. Besides acting, she is also known for her social and political activism for a range of causes.

While in college, Susan Tomalin met fellow student Chris Sarandon and the couple married on September 16, 1967. They divorced in 1979, but she retained the surname Sarandon as her stage name.

Sarandon dated Italian filmmaker Franco Amurri, with whom she had a daughter, Eva Amurri, on March 15, 1985.

Sarandon was in relationship with actor Tim Robbins and Jack Henry was born in May 15, 1989.

Sarandon was in relationship with actor Tim Robbins and Miles Guthrie was born in May 4, 1992.