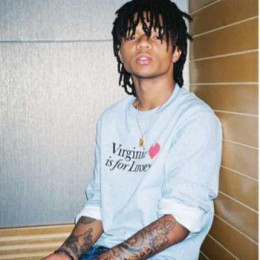 Khalif Brown, "Swae Lee" is an Atlanta-based rapper who makes up one half of the hip-hop duo Rae Sremmurd, performing alongside his brother Slim Jimmy. Alongside his brother, the hip hop duo is best known for their platinum singles "No Flex Zone" and "No Type"; which peaked at numbers 23 and 9 on the US Billboard Hot 100. Their debut album SremmLife was released in 2015.

Is Swae Lee Dating Someone?

Swae Lee is possibly single as of now. He is not seen with any ladies nor heard of hanging around with girlfriends followed by his split with social media star, Marliesia. He is probably waiting for the true love of her life.

He's recently broke up with a girlfriend, Marliesia Ortiz. They have been in an intermittent relationship for four years. She is an Instagram model by profession. The model found he had been cheating while on the road.

Marliesia has been arrested in August 2019 for a physical fight with Swae Lee in his L.A. home. She allegedly head-butted and hit the Rae Sremmurd rapper with objects. After being escorted out Ortiz called the police, claiming Swae had physically assaulted her. However, everything was sorted out when the police arrived at the spot.

There are lots of rumors of him dating several gorgeous ladies but there are no exact details in this regard so he is assumed of being single. Controversy arose after he got arrested for driving with a suspended license.

How Rich Is Swae Lee?

Swae lee possesses an estimated net worth of  $6 million as of December 2019. He bags huge fortune from his successful career as a songwriter, singer, and rapper.

The 26-year-old garnered some prestigious awards like Grammy and MTVU Woodie Awards for his songs "Formation, Sunflower and Sicko Mode in 2017.

Swae Lee featured in the song Unforgettable alongside Moroccan-American rapper, French Montana. The song peaked at no.3 on the Billboard Hot 100 making it Swae Lee's top-ten single on the chart being a solo artist.

Speaking of lifestyle, the rapper currently resides in a $3.6 million dollar house located in Chatsworth, California. He drives a lavish white Rolls Royce car which costs around $45,000.

Previously, he was seen with a black Lamborghini car. He spends money on expensive watches, diamond, and white gold rings, bracelet and chains.

Khalif Malik Ibn Shaman Brown aka Swae Lee was born on 7 June 1993 in Inglewood, California, United States. He was raised by a single mother who worked on tanks in the U.S. army.

The rapper spent his early days in Tupelo, Mississippi and learned music in high school with his brother Jxmmi and Li Pantz. Lee and Slim signed to Mike Will Made-It label in 2013 and subsequently, they released three studio albums under SremmLofe, SremmLife2, and SR3MM.